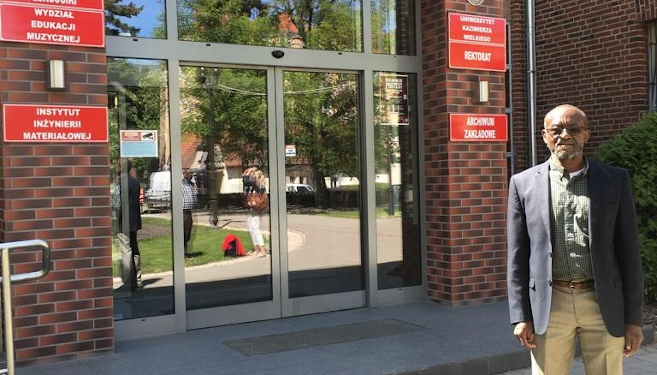 The visit to the University of Marie Currie and Kazimierz Wieki University was organised by Professor Anna Dluzewska, who is part of the two universities.

Said Mtapuri: ‘We received a red-carpet welcome from Professor Dluzewska and her team, inclusive of media. We held productive meetings that explored opportunities for collaborative co-operation in areas such as joint research projects, co-supervision and staff and student mobility. We had the privilege to meet University of Marie Currie Rector/Vice-Chancellor, Professor Radoslaw Dobrowolski who offered support for these initiatives.’

At Kazimierz Wieki University, collaborative opportunities that are part of the Erasmus+ programme were explored. Head of International Relations, Ms Aniela Bekier-Jasinska said: ‘International exchanges is where we have our greatest strength for future collaborations between the three universities. Many of our students are involved in practical internship programmes in Poland and abroad under its international student exchange programme.’

Mtapuri together with the team also engaged with South African Ambassador to Poland, Ms Nomvula Mngomezulu who spoke about enhancing trade between South Africa and Poland that involves industry players such as South African tourism, business chambers and others to strengthen the arrangements. She also strongly supports initiatives between universities.

Dean and Head of the School of Built Environment and Development Studies, Professor Ernest Khalema acknowledged the efforts led by Mtapuri in driving the School and the University’s internationalisation strategy with Polish universities.

‘We have so much to learn from each other and share with former eastern bloc nations on nation-building, having gone through transitions to democracies. For just societies to thrive for the benefit of underserved communities, we require such engagements and exchanges. I am glad that we were able to reconnect as a consortium of universities in Durban to cement some much-needed footprints in eastern Europe. We are looking forward to the proposed MoUs and further institutional engagements,’ he said.