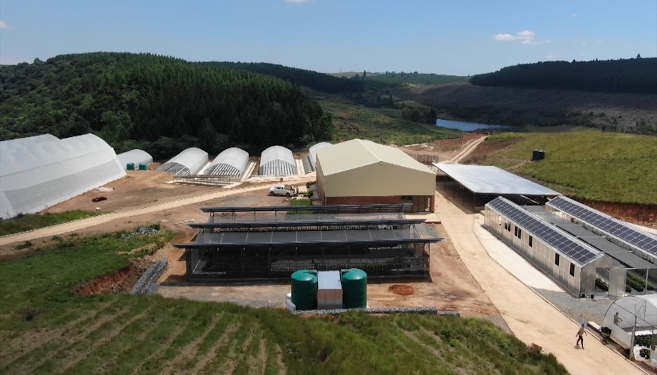 Hydroponics and glass greenhouses at the Fuze Farm.

The Fuze Institute, through its existing partnership with the College of Humanities, is poised to launch a ground-breaking Food Security Programme for marginalised citizens of KwaZulu-Natal in July 2022.

UKZN has pledged infrastructural support for the programme in the form of land for the planting of agricultural produce as well as personnel to facilitate the processing of the food. The University will also make its industrial kitchens on the Howard College and Pietermaritzburg campuses available to prepare food for disadvantaged students.

The programme is Fuze’s social investment initiative which forms part of the Institute’s humanitarian initiative. It will be conducted under the foundation called When Thandi Smiles, named after founder and CEO, Ms Thandi Ngcobo.

Ngcobo’s upbringing as a teenager was marked by severe hardship that caused her to suspend her education to look after her family. This inspired her to extend her compassion wherever she identifies poverty and human suffering.

The programme’s overall focus will be on alleviating hunger within our immediate communities, with a special focus on the unemployed, child and women-headed households, victims of the recent devastating floods in the eThekwini region and University students who are struggling to fund the daily demands of their education. A balanced meal a day will vastly improve their chances of successfully completing their studies,’ said Ngcobo.

UKZN students will be provided with daily cooked meals from the Fuze and UKZN farm and catering operations. The programme also includes an added innovation which involves the generation of solar power from a photo-voltaic system that will be installed on the roof-tops of the greenhouses that will be producing the food. All excess food and electricity will be sold to generate additional income for the purpose of supporting other humanitarian outreach programmes within the College of Humanities and the immediate community surrounding the university.

‘We hope this programme becomes a legacy project which will be self-sustaining long into the future. Apart from providing food security for the targeted sectors, it will be operated by cooperatives from previously disadvantaged communities who will prepare and sell the food at a fraction of its market value. It is sincerely hoped that this project will transcend narrow individual interests and become a true legacy project that will serve our communities long into the future,’ said Ngcobo.