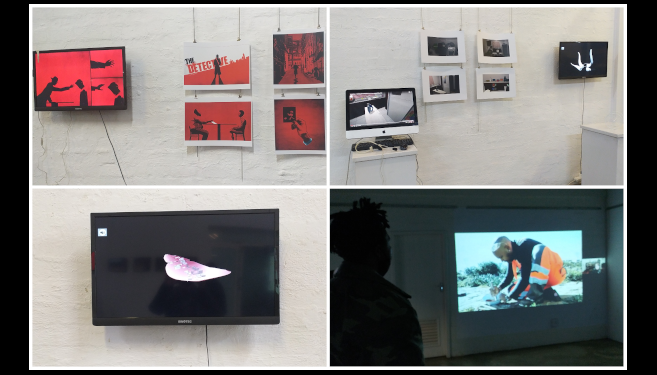 Works from artists at the Interchange exhibition.

The Digital Arts discipline recently hosted Egyptian artist Sherif El Azma as part of the Andrew Mellon Foundation Artist-in-Residency project which aims to recruit, support and collaborate with emerging and experienced artists from South Africa and throughout Africa.

The two-week public exhibition titled Interchange was held at the Jack Heath Gallery in Pietermaritzburg. All the work resulted from or was influenced by dialogue and interchange with El Azma during his residency period.

The postgraduate seminars were mentored by El Azma, Stewart and the late Ms Claire Dongo. With El Azma online from his Cairo apartment, there were dynamic cultural interchanges with the digital platform opening a space for diverse modes of discussion and the sharing of ideas.

Said El Azma: ‘The very exchange in dialogue itself, especially in our field of art and cultural studies, opened up a re-education process with every sign pointing at how both locations in many ways reveal the huge socio-political and global changes that have become and still are challenging for such hotspots. A look at the parallel situation helps one understand not only how the art world works but also how the world is concerned - if not governed - by its complex “in transit” systems.’