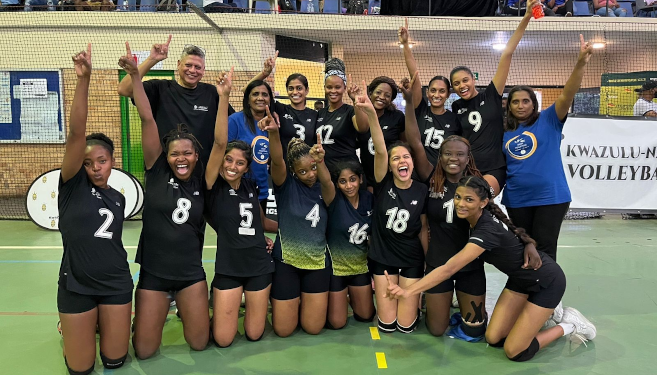 The jubilant team and their Coach celebrate taking the gold at the National VSA Club Championships.

UKZN Takes Gold in Historic Win for the Province

The UKZN Ladies Volleyball Team won gold at the National Volleyball South Africa (VSA) Club Championships 2022 in a historic moment for the province of KwaZulu-Natal and the University.

Team Coach, Mr Marci Harold, was overjoyed at the win and commended the team members for making history. ‘They are all exceptional players who challenged each other to be the very best they can be… that’s why the gold was possible. They put in lots of hard work and the ladies were pushed physically and their skill levels enhanced.’

Harold said the secret of the team’s success was believing in themselves and trusting each other as teammates. ‘They know that each player was capable and able to handle any high-pressure situation.

‘I think this has been my greatest victory. Only after the well-wishes and reading the many messages from across the world did I fully understand the magnitude of the victory. I didn’t know we were the first female team from KZN to win the tournament. That it was our team who achieved this feat makes it even more special - it’s definitely an amazing experience,’ he said.

Relaying her message to her teammates comprising of UKZN students, alumni and members of the community, Team Captain and UKZN alumna, Ms Reyanka Kisten said: ‘To my teammates and coaching staff, you have all become my family. I have played for the UKZN Volleyball Club from 2017 and I can finally say that 2022 is just the start of great things. This is the year of “falling forward” as we will never back down from a challenge and will take on each and everything that is thrown at us together.

‘We are a team that lives with no regrets and always remember you are never alone on that court. I play for you and you play for me. You have not only won my heart, but you have won the hearts of many by inspiring and instilling greatness just as UKZN sets out to do. As Coach would say to each and every one, you are “damn brilliant”. I would like to thank every single one of you as without you, our dream would not have come true. Being your Captain has been an honour thus far and I hope that I can make you as proud as you make me and I will fight for you all always. Winning the Champions Cup has been an achievement of a lifetime for us as we have made history and now it is time to make some more so I say LET’S GO!’

Kisten, who holds a BCom Honours in Supply Chain Management from UKZN, acknowledged Coach Harold for being the ‘backbone of the team’ and helping them overcome one of their greatest hurdles. ‘The most challenging thing that we as players faced during training was the challenge of overcoming our doubts. We played with self-doubt and our coach, Marci Harold, had drilled confidence in us as players. By overcoming this, we were able to unlock more skills and the opportunities on court become unlimited - which allowed us to play at a level we have never played at before. This was the game changer for our team.’

Harold, who is also the Head Coach of the SAPS National Male Volleyball Team, had these words of advice for Team UKZN: ‘Keep striving, keep pushing, keep working hard. Everyone wants to beat the best, so our standards have to be maintained. Our work ethic can never slacken. Getting to the top is hard, but staying there is even harder.’

UKZN Sports Manager, Mr Mark Bashe, congratulated the team on flying the University’s flag high: ‘This is a historic achievement for our UKZN Women’s Volleyball Team to be crowned the South African champions. We continuously encourage our female students to participate in sport at a recreational or a competitive level. It’s good to see that recipients of the UKZN Sports Scholarship have contributed tremendously in achieving this milestone. We will continue to support our team as they prepare for the Southern Africa Volleyball Championships to be held in Zambia in December 2022.’

Harold thanked UKZN Sport for giving him the opportunity to coach its Ladies Volleyball Team which he described as ‘amazing.’ ‘They have been good for my volleyball soul and I want to thank them for invigorating me. We also have an amazing technical team whose work does not go unnoticed… Mrs Roshnee Naicker from UKZN Sport, Mrs Shaheen Moodley and Mrs Joelene Moodley our dedicated team managers and all the others that contributed to this success, thank you. We also have very supportive parents who must be acknowledged.

‘I want to make special mention of our Captain Reyanka, she is an amazing player and leader on and off court. Special mention must also go to Ms Busisiwe Maposa, our most experienced player. She had a fantastic tournament! I’m just glad we were the first team to do it and to make so many people happy. I hope my young ladies know how intensely proud I am of them,’ he said.

Highlights from the Championship included these special awards:

The UKZN Male Team also performed very well, pushing through the quarters and proceeding to the semi-finals of the tournament which placed them amongst the top four teams in the country.