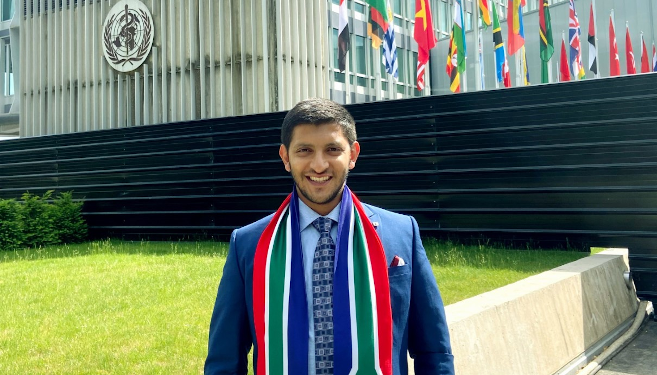 Suleman’s selection is not only a proud moment for South Africa but for the Medical youth voice worldwide. He formed part of the official youth delegation to the WHO.

The WHA is the WHO’s highest decision-making body that is attended by world leaders and delegations of its 194-member states. A detailed agenda on global health is discussed with a plan of action on priority health areas that countries should action.

Suleman was selected by the International Federation of Medical Students’ Association in collaboration with the WHO which enabled him to spend two weeks in Geneva and attend high-level meetings with heads of state of various countries. He personally met and interacted with the Director-General of WHO, Dr Tedros Ghebreyesus.

Suleman also met and engaged with Ministers of Health of different countries and gained insight into the health challenges in different parts of the world.

He said, ‘The experience was overwhelming especially given that I would’ve been the youngest person in the room. It was a dream come true to be invited to the WHO and to attend the World Health Assembly.

‘The involvement of young people in important high-level meetings is a clear illustration of youth empowerment and WHO’s commitment to nurturing young talent to truly step up and be active in health matters.’

The rising star is well-known for his advocacy efforts and leadership skills and has been actively involved in combating COVID-19 vaccine hesitancy.