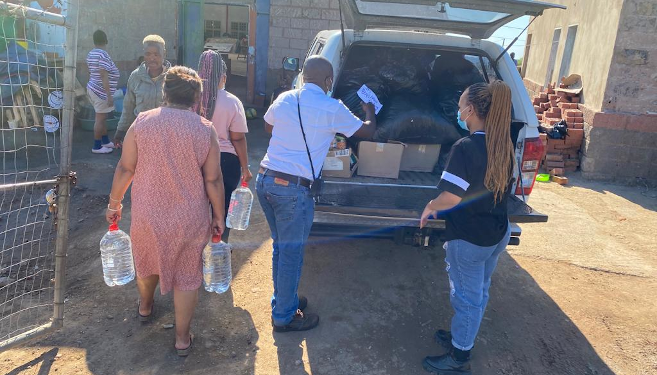 Community Engagement sectors in the College of Humanities help communities affected by the recent KZN floods.

UKZN staff and students, through Community Engagement sectors in the College of Humanities, recently assisted communities that were affected by the recent KwaZulu-Natal (KZN) floods which left hundreds of people dead, and thousands displaced.

The initiative aided people who lost their homes, did not have food, clothing, sanitary towels or toiletries, and learners who were unable to go to school because they did not have stationery and uniforms.

Mtshali said: ‘The living conditions of people in these centres is unpleasant. There were 92 people in one hall and the roads to access these centres were badly damaged. People did not have enough water - some centres had empty water tanks and there were toddlers and babies who did not have nappies and necessities.’

Reflecting on the initiative, James said: ‘The immense effort of our student volunteers is impressive and appreciated. Student engagement is purposeful and worthwhile. Actions are important. In the words of Ms Luyanda Khawula who is a student: “People are going through the most out there … we should all work together to assist where we can”.’