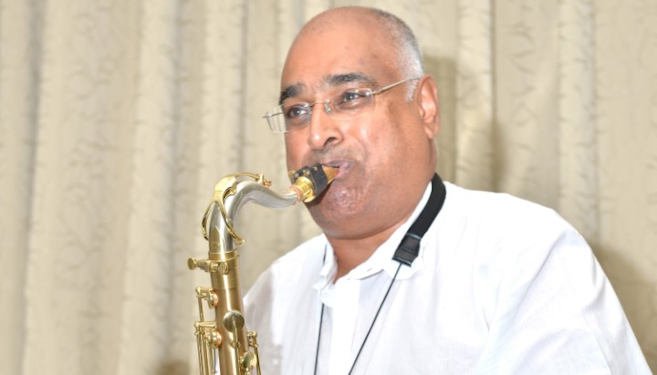 The School of Arts (Music) recently held a farewell concert for Chats Devroop, Music Professor and Academic Leader for Research in the School.

Devroop also took to the stage to perform alongside his band members and students.

Devroop, who turns 60 this year, will take up a full research professor position focusing on a niche research area that he has been exploring for some time. ‘I would like to believe that I have already made a difference in teaching and learning nationally, and wish to focus the latter part of my career on my research interests,’ he said.

Devroop began playing music at the age of six, taking up the flute. He was heavily influenced by his late, talented autodidact father who was also a musician. Devroop honed his skills, attaining many degrees and qualifications in music. He now plays saxophone, recorder, melodica, piano and electronic wind instruments.

‘I grew up in a household where there was always music. Most of the musicians who were part of my father’s ensembles were unskilled, but their love for music and eagerness to learn inspired me. Under very difficult socio-economic conditions, I witnessed how my father supplemented his income by “gigging”. The limited income from the gigs enabled me and my family to go to bed with food in our stomachs each evening,’ said Devroop.

‘As children, we could not afford a private music education or tuition. The passion to teach music coupled with seeing the joy it brought to others was instilled in me at a very early age. My calling was clear - to become an educator. I love teaching and remain truly impressed by those who teach.’

Reflecting on his time at UKZN, he described the University as a ‘place of positive growth. It helped shape me as a musician, scholar and leader. I have been blessed to have befriended several people at UKZN who were willing to share their time, expertise and projects. They were my sounding boards and support. Overall, I am deeply grateful for my tenure and experiences here.’

Devroop’s message to his students is, ‘You have incredible talent to reshape the artistic landscape of South Africa. I firmly believe that many of the solutions to today’s crises lie in the arts and in creatives. Focus on your progress and do not engage in destructive behaviour against the very institution that will determine your future success. Take your lesson from the recent devastating floods which took only a few hours to destroy years of hard work.’