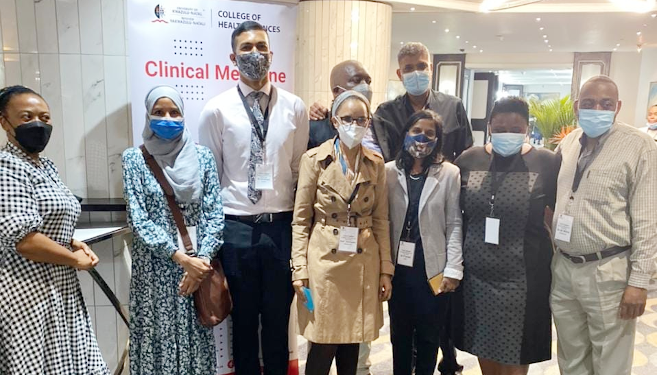 Keynote speakers at the Obstetrics and Gynaecology Annual CME Update.

Head of Obstetrics and Gynecology, Professor Hannah Sebitloane, welcomed guests to the event. Dr Sudhir Prithipal delivered an address on preterm labour. He noted that the World Health Organization (WHO) estimates that 15 million women are exposed to preterm labour each year, resulting in the deaths of a million babies. Preterm labour is the leading cause of morbidity in children under five and the main cause of neonatal mortality in South Africa.

Dr Nomandla Tsibiyane focused on antileptic treatment (AED) in women of reproductive age. She highlighted the importance of a detailed history and clinical assessment in choosing the most suitable AED, factoring in reproductive aspirations. These patients should also receive folic acid supplements to ameliorate cognitive and neural tube defects.

Dr Rajesh Gangram motivated for all patients undergoing an intimate examination to be offered a chaperone or invited to bring a relative or friend to the consultation.

‘Teenage pregnancy and abortion rates have decreased in many countries since the 1990s. Worldwide, complications associated with pregnancy and childbirth are the second highest cause of death among women aged 15 to 19,’ said Head of Family Planning, Dr Mala Panday.

Physician, Dr Farhana Paruk presented on the prevention and treatment of osteoporosis. ‘This silent disease is under-recognised and is not a priority in middle- to low-income countries. The disease burden is increasing in Africa as the population ages and early screening to identify high risk patients is of the utmost importance,’ said Paruk.

Dr Tasnim Ebrahim, an obstetric intensivist, focused on the management of critically-ill obstetrics patients. She urged health professionals to upgrade their skills to recognise critically ill patients so as to reduce maternal mortality and morbidity.

Dr Shivani Chirkut from the Medical Protection Society, focused on the impaired practitioner. She quoted Fiala (2004: 2925-2926), ‘It’s time to give mental illness a name, a face, a story. Only in doing so will the stigma lose its power.’

The ‘Dos and Don’ts of Hormonal Replacement Therapy’ were discussed by Dr Noluyolo Sigcu, a reproductive health specialist. She highlighted that hormonal therapy is ideal for the management of vasomotor symptoms in a peri-menopausal woman. However, it is not recommended as a sole or primary indication for coronary protection in women of any age.

‘Sustainable Development Goal 5 (including women’s health) has to be at the centre of efforts to address the reversal of development gains and inequalities in digital access. Policies and programmes that value women and girls must be put in place. There needs to be focus on early inclusion in research of pregnant and lactating women,’ said epidemiologist and co-founder and Associate Scientific Director of the Centre for the AIDS Programme of Research in South Africa (CAPRISA), Professor Quarraisha Abdool Karim.

The event ended by recognising those in private practice who support the Discipline and the handing out of long service awards. A lucky draw was held for R1 000 Woolworths vouchers sponsored by PPS Insurance. The prize of a Nutribullet blender went to Sebitloane, who plans to place it in the departmental kitchen for communal use.