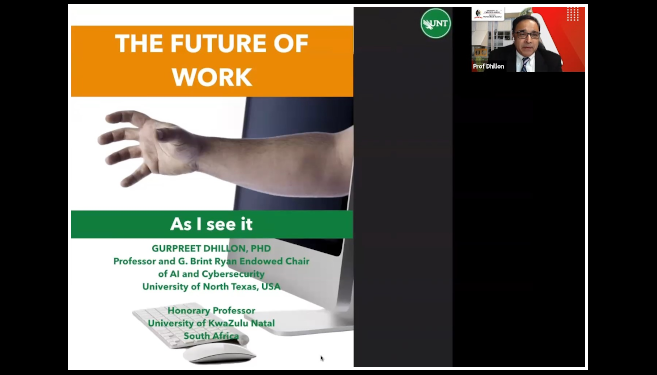 How is the Evolution of Technology Affecting the World of Work?

The Future of Work, As I See It was the title of a webinar hosted by UKZN’s School of Management, Information Technology and Governance. It was presented by Professor Gurpreet Dhillon, an honorary professor in the Discipline of Information Systems and Technology. Dhillon is the G Brint Ryan Endowed Chair of Artificial Intelligence and Cybersecurity at the University of North Texas, USA.

Dhillon shared insights on how technology has fundamentally changed the nature of work, and how the “connected” live, work, interact, and socialise. His experience working in many countries has shaped his perspectives on the changing world of work which he shared with the enthusiastic audience. He focused on the evolution and prevalence of the infonet (information network) organisation, the velocity of technological change and how the nature of work has evolved recently.

‘The number of devices we have connected in 2022 is twice the human population and there are 0.5 billion machine-to-machine connections. These are mostly concentrated in the developed world meaning that, depending on the type of job that you currently hold, chances are high that your job may be automated. Automation, virtualisation, and AI are here and the reality is that we are moving into an uncertain future. We need to be prepared.

He elaborated that while automation replaces jobs in some industries, it will lead to growth in others. Dhillon also shared insights on how the change in the nature of work is leading to changes in the traditional work model.

‘When our parents started working, the traditional model of work which still exists to some extent in many countries was that you went to college until you were 25, established your first career between the ages of 26 and 31 and had one career until retirement.’

He noted that this model has been transformed and it is anticipated that by 2030, it will no longer exist.

‘In just eight years from now, it is likely that you will get your first education by the age of 25. Then technology and others things will change, leading you to have your first career between of ages 26 and 31, and probably switching careers between the ages of 33 and 36. You will go back to school for your second education between the ages of 37 and 39, have your third career between 40 and 49, then probably take a year off and have your fourth career between 47 and 55. Then you will probably go back to school to educate yourself, have your fifth career and go all the way until after 75. In the United States, the retirement age is constantly going up which means people are working longer.’

Dhillon listed routine production services such as blue collar and supervisory jobs, in-person services which are simple repetitive tasks done on a person-to-person basis and symbolic-analytic services which are problem identifiers, problem solvers and strategic brokers such as research scientists, design engineers etc., as the three jobs of the future.

‘The capacity to earn and do things is going to be higher in the symbolic-analytic services and not so much in the routine production and in-person services. The future is going to be one of lifetime learning, mentorship more than hard skills. You are going to be retraining and rediscovering yourself, suffer burnout and remain in that cycle. The question is, which of these three categories do you want to be in or where do you want to counsel people to be?’ he asked.

In her closing remarks, Dr Upasana Singh, Academic Leader of the Discipline of Information Systems and Technology thanked Dhillon for sharing his insights, especially in the academic space as the topic generated much interest and engagement. A follow-up forum where these matters are expanded upon and discussed is being planned.