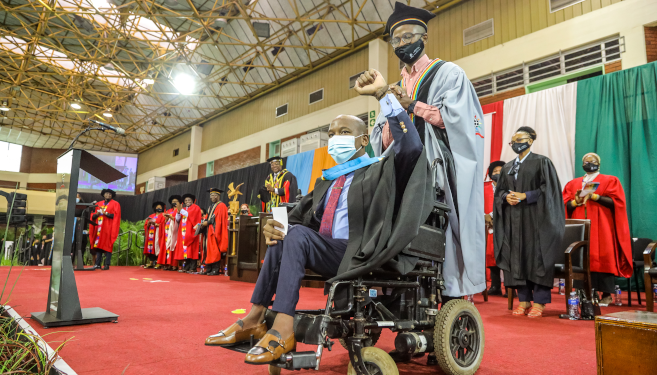 Born and raised in the rural town of Nongoma in northern KwaZulu-Natal, Mr Luyanda Khoza who is paraplegic overcame adversity to graduate from UKZN.

A medical mishap at the age of six rendered Khoza paralysed from the waist down but this did not discourage him from living a “normal” life. After matriculating, Khoza went on to enrol at UKZN with the support of a National Student Financial Aid Scheme (NSFAS) bursary.

He was disappointed that he did not manage to matriculate with a sufficiently high academic performance score to enter his first choice of study which was Pharmacy but grateful that he achieved enough to enrol for an access programme that would lead to a Bachelor of Social Sciences degree (Extended curriculum - BSS4) majoring in Psychology, Criminology and Forensic Studies.

The access programme caters for students from disadvantaged educational backgrounds. Khoza says the additional year helped him transition from his rural schooling background to university life and learning with technology. For example, he had never used a computer before then.

Although the odds were stacked against him, Khoza said he was grateful for every opportunity and ready to work as hard as his non-disabled peers. ‘I never had the mindset of being a person who needs special treatment. I was the only learner with a disability in my primary and high-school. I had to do what the other kids did. I pushed myself to live as everyone else did.’

He said he couldn’t find the words to describe what it was like to not only graduate but also receive support from the audience who cheered and ululated as he was capped.

A role model to his younger brother and sister, Khoza said he was humbled by the challenges he has faced throughout his life. ‘I could be bitter about my situation but that would only hold me back. I will never allow anything to stand in the way of achieving my dreams.’

He added that he didn’t expect to enjoy Psychology as much as he did and is currently studying for an honours degree.