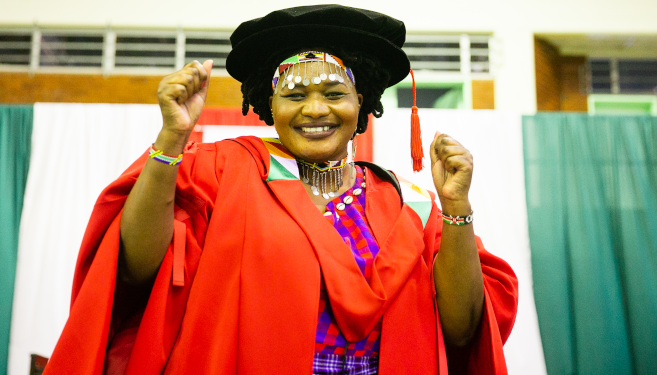 UKZN Academic Development Officer Dr Betty Chebitok graduated with a PhD in Psychology following research she did using a discursive approach into how university students discuss HIV risk in relation to their testing practices for the disease.

Examiners commented on the importance of Chebitok’s detailed work on understanding how students positioned themselves and HIV risk.

This study found that most participants constructed HIV as a huge threat and positioned themselves as being aware of how serious the threat of the disease is in their setting, but distanced themselves from it. ‘This distancing relates to the negative identity of being HIV positive, having a visible sickness with a body severely affected which puts one at risk of stigma,’ said Chebitok. ‘In this situation, the positions which are available to them are limited, while discourses that are available in their context limit their engagement with HIV testing as a protective practice.’

Chebitok found that participants who reported testing did it in a crisis, being concerned about being infected with HIV after engaging in unprotected sex, or worried about being betrayed by a partner and being exposed to the virus.

‘Prioritising HIV prevention through testing does not help youth in the development of their desired identity - it seems to generate a negative HIV identity which works to undermine the value of HIV testing in their everyday life,’ she said. ‘Their avoidance of HIV testing is one of their many small actions to protect themselves from the negative identity and from knowing it, and others from associating it with them.’

She recommends that ‘health interventions targeting the youth need to focus on subtle aspects of HIV risk, such as their construction of the self (identity).

‘More discursive, qualitative research on this topic is suggested at UKZN to understand how HIV testing strategies and interventions on its campuses have worked,’ said Chebitok.

She thanked her family, friends and supervisor, Professor Mary van der Riet, for their support.