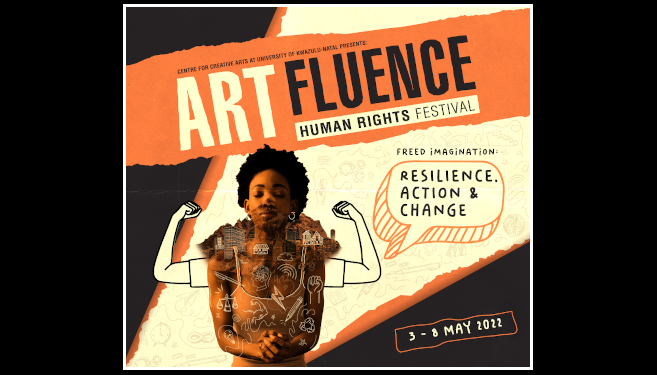 Artfluence Human Rights festival kicked off with a jam-packed session.

The second annual Artfluence Human Rights Festival themed: Freed Imagination: Resilience, Action and Change was hosted by UKZN’s Centre for Creative Arts (CCA) in the College of Humanities, in partnership with the uMngeni Municipality and uMngeni Tourism.

The festival, which featured and profiled artists whose voices and creativity advance a culture of human rights, marked the 60th anniversary of the capture of Nelson Mandela, highlighting the Capture Site in uMngeni and boosting opportunities for cultural tourism in the region.

There was an extensive programme of live and online events broadcast on YouTube and Facebook, with audiences joining in on Zoom.

‘We were delighted that with the end of the national lockdowns we could present a hybrid festival this year with both online and live events; the latter made possible through a partnership with the uMngeni Municipality and uMngeni Tourism,’ said Dr Ismail Mahomed, the Director for the Centre for Creative Arts.

According to Mahomed, ‘The festival located at the Capture Site aimed to draw inspiration from Mandela’s legacy and attract visitors to the site after the devastating impact of the national lockdown on the cultural economy. Our partnership with the uMngeni Municipality and uMngeni Tourism aims to strengthen a cultural economy that enables local art organisations to thrive.’

The festival opened from the capture site and featured this year’s keynote speaker satirist Conrad Koch and his alter-ego Chester Missing who provided entertaining but biting commentary about South Africa’s democracy.

Live in uMngeni opened with the Umongo Msindo (Sounds in Context) exhibition, an immersive installation that brings musicians into conversations with their traditional African instruments through videos and textiles that function as interactive wall pieces and a Quick Response (QR) portal that expands on their work.

South African political cartoonist Nanda Soobben exhibited 25 of his cartoons that are a powerful commentary on South Africa’s constitutional democracy.

UKZN’s Centre for Jazz and Popular Music presented a concert featuring some of its most talented students while the Flatfoot Dance Company under the directorship of Dr Lliane Loots staged their latest production, The Cleansing, which journeys into the heartland of Earth issues and negotiates the true meaning of ecology - the connectedness of human existence to all existence.

The Centre also facilitated skills-based workshops in art practice and administration for uMngeni-based artists during the Live in uMngeni Artfluence Human Rights Festival.