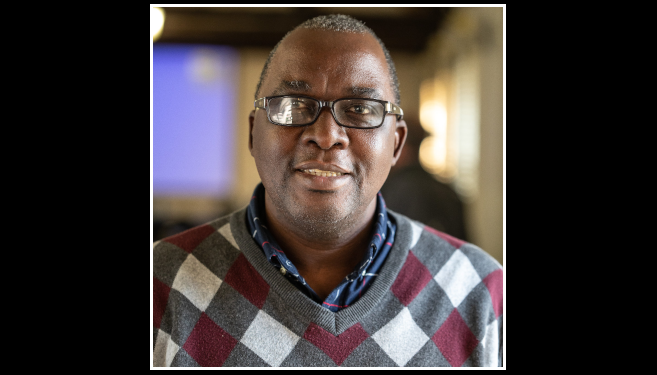 Professor Sihawukele Ngubane of the African Languages discipline in the School of Arts has been honoured with a Men of Magnitude Award.

The prestigious award is from the New York-based Women of Magnitude/Men of Magnitude limited liability company (LLC) and the Dr Thandeka Mazibuko Foundation.

‘The event was conceptualised with a vision to honour, celebrate, and create cancer awareness and free screening for disadvantaged communities while highlighting those who serve the community,’ said Dr Thandeka Mazibuko. ‘The Men of Magnitude Awards celebrate the phenomenal and evolutionary work these various women and men do in their respective countries.

‘The Awards are made in partnership with the SinomusaNothando Community Development Inc who build cancer centres in rural communities and offer free cancer screening to communities in need. This partnership strengthens the relationship between South Africa and New York City,’ said Mazibuko.

Said Ngubane: ‘A man of magnitude is someone you look up to - an historical figure who has made a powerful mark on society,’ he said. ‘I have dedicated this day to my parents who brought me up to be the man I am through their teachings and belief in me. Both my parents were educators and academic leaders of their time and had a passion for education.’

He said he was humbled by the award. ‘This is quite an achievement since it has always been my dream to be an educator and to teach and inspire the people of my community. The award reflects my hard work.’

He thanked his family for being his support system. His son, Lindelani, said: ‘My father is indeed a Man of Magnitude.’

During his address on receiving the award, Ngubane spoke about the challenges of entering academia during the apartheid era, the highlights of his career and the power of indigenous languages.

‘Apartheid or segregation led us to underestimate ourselves and to develop an inferiority complex. It could even be said to have robbed us of our souls and we have had to work even harder to be achievers. Bantu education was designed for Black African people and was intended by the apartheid government to limit our intellectual development. In spite of that, some of us, by great effort, managed to reach higher levels of education. Our experience as Black South Africans has compensated us with wisdom to face the challenges of social injustice, and to achieve education against the odds while fighting the inequalities of the apartheid era,’ he said.

‘Educating students from different backgrounds has equipped me with an understanding of the value of a human being.

‘Men and Women of Magnitude will host another awards ceremony at the Yankee Stadium in July during the New York Football Club game. We will honour young soccer players from South Africa and Africa with these awards.’