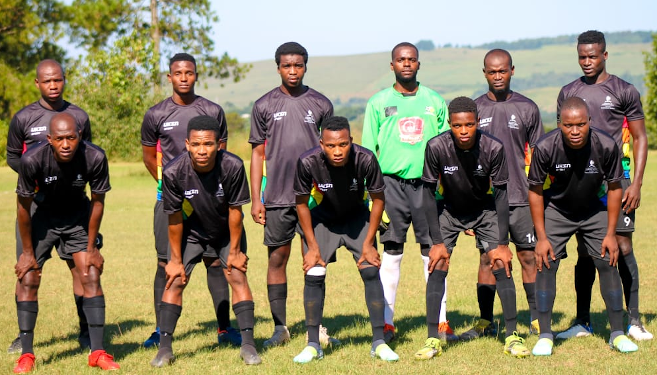 UKZN is achieving great success academically as witnessed at the elegant Autumn Graduation celebrations, but has also been scoring impressive wins on the sports field through the Edgewood Campus Football Team currently competing in the SAB League which is affiliated to the South African Football Association (SAFA).

The team, who sent their congratulations to all UKZN graduates, were the champions in the Western area section (Pinetown, KwaSanti, Klaarwater and Hammarsdale) qualifying them to play in the group stages of the playoffs on the Edgewood campus.

Said assistant coach Mr Teboho Hlao: ‘The boys are determined to go all the way to the third division which is the ABC Motsepe league and with the support they get from fans anything is possible. At the beginning of the season we sat down and set out our goals - so far everything is going according to plan. We look up to institutions like the University of Pretoria and Wits that compete in the highest division and we say UKZN belongs there.’

The Edgewood team beat Bhaki FC in the quarterfinals that were held at the Stella Stadium in Glenwood on 25 May and are gearing up to verse Inanda Real Stars FC in the semifinals at SJ Smith Stadium in Lamontville on Saturday, 28 May.

‘We are asking the UKZN alumni community and management to assist with resources such as food, energy drinks, fruit, water and energy bars for the 25-man squad,’ said Hlao. ‘The team also needs assistance with funds to transport players based in Pretoria, Johannesburg, Vryheid and Mooi River. In the group stages the team was supported by companies including SPMG, African Pearl Trading and the Knowles Superspar, while the Department of Student Residence Affairs helped transport supporters from Edgewood to the games.’