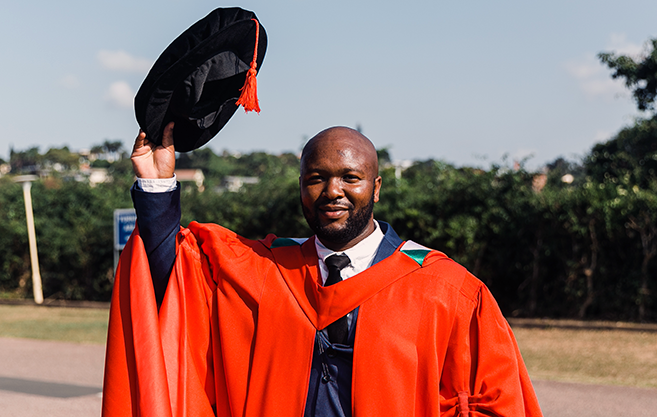 Dr Sifiso Gumbi who plans to pursue a career in academia.

PhD for Work on Microalgae for Wastewater Treatment and Biofuel Production

Dr Sifiso Gumbi was awarded his doctorate in Microbiology after conducting innovative research that involved examining the potential of indigenous microalgae to produce biofuel as well as treat wastewater; work that he hopes will pave the way for cheap and sustainable methods of wastewater reclamation and biofuel production.

The aim of Gumbi’s research, supervised by UKZN’s Professor Ademola Olaniran and Dr Taurai Mutanda of Mangosuthu University of Technology, was to develop and optimise technology for sustainable wastewater treatment and biomass accumulation for biodiesel production to satisfy the needs of communities and industry.

The strains of microalgae used in Gumbi’s study were isolated in KwaZulu-Natal, where he uncovered a hyper lipid-producing microalgal strain that could be used as feedstock for sustainable and eco-friendly fuel production and wastewater treatment. This original work resulted in three publications in reputable international peer-reviewed journals.

Originally from Ingwavuma in KwaZulu-Natal, Gumbi attended Ziphozonke High School in Empangeni and enrolled for undergraduate studies in Biochemistry and Microbiology and honours studies in Microbiology at the University of Zululand.

The relevance of microbiology for innovation in biotechnology motivated Gumbi to pursue research in applied and environmental microbiology focusing on wastewater treatment and biofuel production.

Drawn to UKZN by its ranking among the top five universities in South Africa and its infrastructure for scientific research, he enrolled for a Master’s in Microbiology on the Westville campus and had his master’s converted to a PhD.

While his research was delayed by the COVID-19 pandemic, he found the PhD experience instructive, saying that achieving this degree compensates for the sleepless nights and hard work and has made his family proud.

Passionate about research, Gumbi plans to pursue a career in academia, aiming for international recognition in his field and hopefully attaining full professorship in his discipline.

He thanked his supervisors for their on-going guidance, support and mentoring during the course of his study and the National Research Foundation for funding his research.

Saying that he was deeply humbled by their support, Gumbi thanked his family for their multiple contributions to his success.