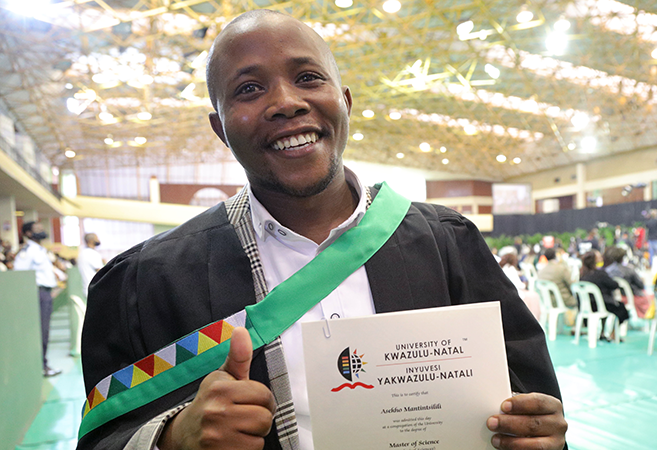 Mantintsilili said he registered at UKZN because, ‘I wanted to study with the best. Many top-class professors teach at UKZN, and I know that a degree from this University means something in the job interviews and will open doors to interesting places.’

He explained the background to his research: ‘Many animal species have been freely translocated around the world as part of the exotic pet trade. Globalisation has been one of the main contributing factors leading to human movement and trade of diversified species from continent to continent. To date, more than 1 000 reptiles are sold as pets worldwide. These include species such as the Burmese python Python bivittatus, green iguana Iguana iguana and red-eared slider Trachemys scripta.

‘These animals have become invasive as a result of pet release or as escapees. Impacts associated with these species include transmission of zoonotic diseases and negative effects on biodiversity through completion, predation and/or hybridisation.’

Mantintsilili explained that online trade and physical pet stores are two of the pathways by which many reptile species are traded in different countries. This has resulted in difficulties in tracking or monitoring species sold across diversified platforms. Poor monitoring of the pet trade often leads to the establishment of several alien species, which may be associated with economic and environmental impacts.

‘South Africa is one of the countries that has trade in reptilian species,’ he said. ‘Some South African native species are illegally exported as pets to various countries. The sale of native species may lead to local extinction, while the sale of alien species potentially leads to invasions.’

He said that there has been limited monitoring of the reptilian pet trade in South Africa.

For his dissertation, Mantintsilili monitored physical pet stores and online trade to determine the trade volume, and current and future distribution of both native and alien reptile species in South Africa.

His study provides a list of all native, invasive and endangered reptiles that are traded in the country.

‘The information on how these species are distributed across South Africa currently and in the future will be valuable in developing legislation and regulations pertaining to the reptile trade in the country.’

Mantintsilili’s interest in this topic developed in his honours year and he thanked his supervisor and co-supervisors for encouraging him to enter this research field. He also thanked his parents, Mr Mzwamadoda Mantintsilili and Mrs Noaction Mantintsilili for keeping him ‘grounded and focused’ and for always encouraging him. ‘I am truly grateful for their love and support. Honestly, I couldn’t have asked for more.’

Mantintsilili hopes to complete his PhD by 2024 at the age of 28. He is currently registered with Nelson Mandela University for a PhD in Nature Conservation.