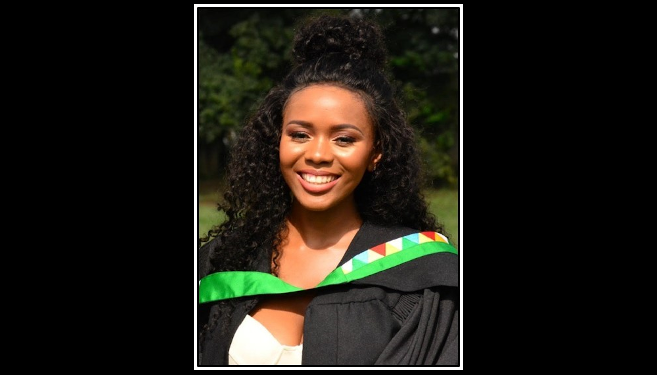 Graduate’s Research on Smallholder Farms Takes to the Skies!

Research by Ms Snethemba Ndlovu not only secured her a master’s degree; it also earned her certification as a drone pilot!

She is now a certified unmanned aircraft systems remote pilot, having obtained her certificate through the African Drone and Data Academy powered by UNICEF.

As a pupil at Raisethorpe Secondary School in Pietermaritzburg, she attended UKZN’s Open Days and science exhibitions as well as a weekend tutoring programme facilitated by the University, which were more than enough to convince her that studying geography and environmental science was the way to go.

Aiming for a career as an environmental scientist, Ndlovu’s undergraduate studies at UKZN soon progressed to a master’s degree in the discipline, doing research she hoped would contribute to a more sustainable environment while improving South African livelihoods.

‘I want to be able to translate environmental and scientific research into implementable solutions for people and the environment,’ she said.

Her honour’s work had explored the use of advanced satellite technologies in monitoring various vegetation ecosystems, including invasive species detection. For her master’s degree she got involved in a WRC project which used drone technology to monitor the state of crops to improve water use productivity with precision agriculture and improved irrigation scheduling.

She received funding from the National Research Foundation and was supervised by Professor John Odindi, Professor Onisimo Mutanga, and Dr Mbulisi Sibanda.

Ndlovu used UAV-based proximal remote sensing to develop a comparative estimation of maize leaf moisture content in smallholder farming systems, focusing on the rural community of Swayimane in KwaZulu-Natal - an area identified by the Umgeni Resilience Project as a climate change hotspot region with climate projections indicating an increased risk of climate-driven events.

‘To efficiently monitor crop health and develop early warning systems to optimise smallholder farmers’ agricultural productivity, data on maize moisture conditions from the specific crop location are necessary, but remain elusive in South Africa because of the shortage of the necessary information and algorithms to process it,’ said Ndlovu. ‘As UAV technology becomes more accessible and the machines can be equipped with multispectral sensors, they can be useful tools in determining various aspects of crop health at a farm scale.’

Findings from Ndlovu’s research are important for the development of a monitoring framework for maize water status as a proxy for crop health and overall farm productivity, with data that is specific to the crop’s spatial and temporal variations.

A paper from her research was published in the Journal of Remote Sensing, and she presented her work at the 2nd Drone Users Conference and at UKZN’s Postgraduate Research and Innovation Symposium.

‘I hope my research will be used to inform small-scale agricultural management practices and sustain rural livelihoods and local food security,’ said Ndlovu.

She thanked her supervisors for the unique elements they each contributed to the success of her project and their dedication to her academic achievement. She also thanked her family for their support.

Ndlovu is an active Member of the International Association for Impact Assessment South Africa and of the African Women in GIS organisation.