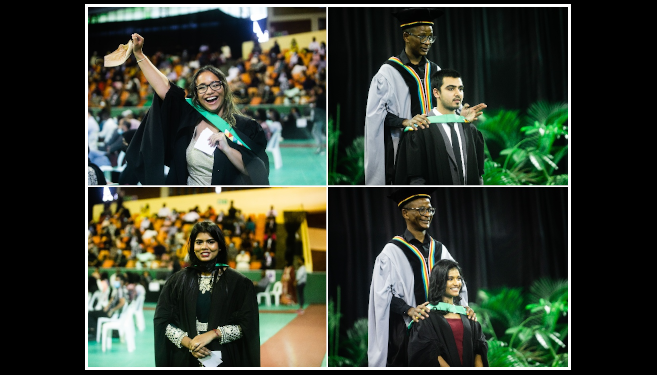 Four of the Best!

Bridgemohan says she chose UKZN because the Engineering faculty has a reputation for being one of the best in the country - affirmed during conversations she had with Chemical Engineering alumni - and because she lives close to the Howard College campus.

Moodley agreed saying it was the reputation of UKZN’s Chemical Engineering department that attracted her. ‘Not only are UKZN degrees fully accredited with the Engineering Council of South Africa (ECSA), a signatory to the Washington Accord,’ she said, ‘but the degree has also previously been benchmarked by the IChemE (Institution of Chemical Engineers).’

As part of their four-year degree, all Chemical Engineering students have to complete a final-year research project.

Bridgemohan’s project investigated the extraction efficiency and selectivity of certain solvents to Neodymium, a rare earth metal. ‘This mechanism has the potential to facilitate the extraction of rare earth metals from waste for recycling, in an effort to meet the growing demand of these critical materials required in renewable technologies and electric vehicles, among other end use applications,’ she said.

‘The data generated from this work has the potential to assist in developing pilot scale studies, which ultimately seek to advance this technology feasibly on an industrial scale. I strongly support efforts made to minimise our environmental impact, so this area of research appealed to me.’

Said Moodley: ‘Living in a technologically advanced era, rare earth metals are commonly used in everyday equipment. Consequently, investigating the recyclability of waste magnets to promote an alternative source for the precious metals intrigued me due to the extreme relevance of the research. There is potential for large scale advancements in this area of research.’

Both Moodley and Bridgemohan are currently working for engineering consultancies, where they hope to further their knowledge and skills in the various technical studies consultancy firms offer.

In her spare time, Bridgemohan enjoys going to the gym, doing puzzles and spending time outdoors, while Moodley prefers spending time with her dogs and being adventurous in the kitchen.

And behind every successful chemical engineer? Why, a supportive family, of course! ‘My family were definitely my biggest motivators,’ said Moodley. Bridgemohan agreed: ‘I am extremely grateful for everything that they’ve done for me, particularly during the challenges of studying remotely.’