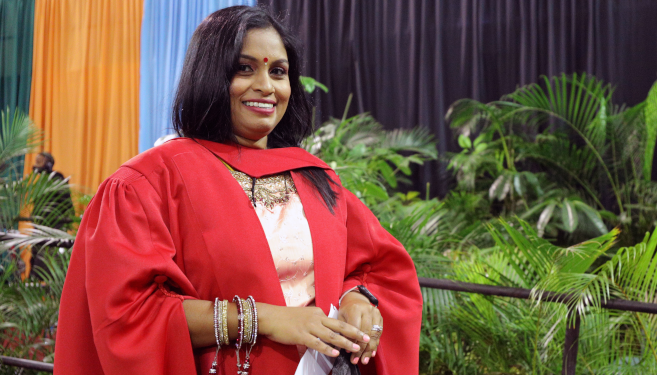 Dr Prabashni Manickum graduated with a PhD in Philosophy (Surgery).

Lower Limb Amputations Caused by Diabetes and Diabetic Foot Care were the focus of research conducted by Dr Prabashni Manickum (38) who was awarded a PhD in Philosophy (Surgery) from UKZN’s School of Clinical Medicine.

Said Manickum: ‘I am thrilled to have attained this degree after many years of hard work and dedication. I am also ecstatic that this project has yielded four published manuscripts, one of which appeared in an international journal. I hope to drive this project into the areas where more people can access the diabetic foot-care education they so desperately need.’

Manickum, a physiotherapist at Addington Hospital in Durban, said her study aimed to determine the prevalence of lower limb amputations and their relation to diabetes mellitus as well as exploring referral patterns for rehabilitation and functional outcomes of patients who attended physiotherapy. She also researched available knowledge on the practice of foot care among people with diabetes globally with a diabetic foot care intervention being proposed and tested among a cohort of patients with the disease.

The study reported that (1) a high number of patients with diabetes mellitus underwent lower limb amputations between 2010 and 2017; (2) referrals to physiotherapy post-surgery were poor but patients who did attend rehabilitation achieved some form of independence; (3) diabetic foot-care knowledge and practice varied from poor to good in various countries; and (4) the diabetic foot-care education programme was useful and successful in educating patients on diabetic foot care and lower limb exercises.

Manickum says rehabilitation is an important aspect of care at Addington Hospital for patients becoming independent or functioning at optimal levels. Over the years, she says she has observed several patients having more than one amputation and this became concerning and led to her research into diabetic foot care and education.

‘There were many challenges as you would find with any large study, however my supervisors always came to my aid and in time these were overcome,’ said Manickum. ‘For me, the biggest challenge was the loss of one of my supervisors, Professor TE Madiba in August 2021. However, Dr SS Ramklass took over, supporting me through to the final process. I am grateful to both of them.’

Most of all she wishes to celebrate her achievement with all the people who supported her along the way.