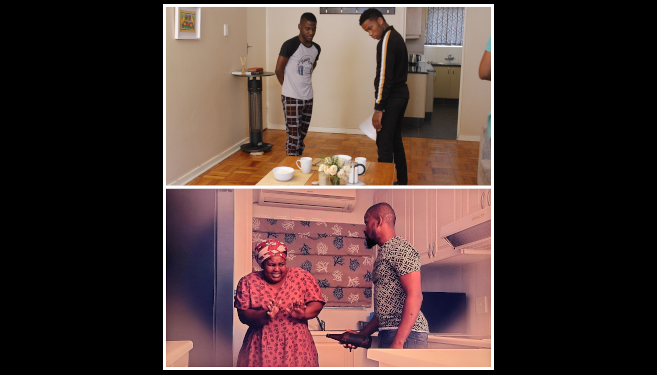 Honours films from the top: The Two Strands of Happiness and An Act of Love.

Xaba directed The Two Strands of Happiness and Reddy An Act of Love. Their scripts were selected from 14 and they were given the opportunity to direct.

Xaba’s film is about a young man who gets a rude awakening on the morning that he plans to propose to his boyfriend. ‘I am grateful that I got to tell this story and I hope to tell more stories of the lesbian, gay, bisexual, transgender, intersex, or questioning (LGBTIQ) community in the future. Furthermore, I hope that my research at master’s level will help me to tell stories but to also give access to the communities where these stories come from,’ he said.

Reddy’s An Act of Love is the story of Zenzile, a young woman who is questioned about the disappearance of her stepfather. It draws on the social issues of gender-based violence and child abuse and their effects on children. Reddy believes that ‘this story is relevant because it shines a light on the psychological and emotional trauma that can be inflicted on young minds in violent environments. More often than not, a child’s mental wellbeing is neglected or not properly addressed in these situations.’

She added, ‘Working on this film was a challenging experience. I was placed in various situations in all stages of production but it proved insightful. I learned the value of team chemistry and how crucial time management and communication are. The whole experience was anything but smooth sailing but I learned a lot, and it will stick with me for the rest of my life.’

Lecturer Mr Mzwandile Makhanya said, ‘The honours film course (Video Production) in the Department of Media and Cultural studies participated in the Fukamisa Intsha Film Project (Fukamisa), which is the Department’s community outreach programme that empowers KwaZulu-Natal’s young students and aspiring filmmakers. Due to being part of Fukamisa, the honours film students became part of this wonderful initiative that facilitates a relationship between our University, communities and industry.’

The screening showcased and celebrated the students’ efforts, especially during the COVID-19 pandemic. ‘We are also enabling a space where students can rub shoulders with our partners such as the KZN Film Commission, Centre for Creative Arts, Durban International Film Festival, Durban Film Office, and others. The students also got a chance to mingle with industry professionals such as Sibongiseni Shezi (who plays the role of Hleziphi in Uzalo), who has been sharing her talent and immense knowledge with us this past year,’ said Makhanya.

He added: ‘We also produced a water and sanitation documentary for the Department of Water and Sanitation Research. Our approach is not only to teach; we speak to matters that affect our community. It is for this reason that the aspiring filmmakers, through Fukamisa, produced films focusing on the Constitution and democracy, gender-based violence, sexuality and identity. Our films do not only entertain; we learn, inform, and uplift.’