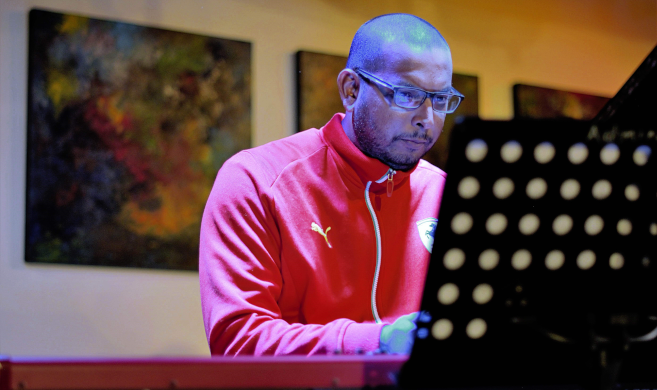 Music lecturer, Mr Burton Naidoo shared some of the music from his upcoming release Sometime Before at Alliance Francaise in Durban.

The concert was organised in collaboration with UKZN’s Centre for Creative Arts and Centre for Jazz and Popular Music.

‘The compositions reflect a life “Sometime Before” the COVID-19 pandemic, during which most, if not all of us, long for normality. We miss simple gestures like hugs, handshakes, and meeting without masking. The music is groovy, edgy, celebratory, and nostalgic,’ said Naidoo.

Sometime Before will be released as an album in March. Naidoo is joined by Riley Giandhari on drums, Trevor Donjeany on bass, and Martin Sigamoney on saxophone.

Naidoo started piano lessons at the age of six with Simon Kerdachi at the Simon Kerdachi Academy of Music. He took a keen interest in jazz from an early age. In 2001 he enrolled in UKZN’S Jazz programme and spent four years under the wing of Mr Darius Brubeck. He was also awarded a scholarship to study at the University of Artisten, Gothenburg, Sweden, where he took lessons with Anders Perrson and Peter Burman.

Locally he has played at The Cape Town International Jazz Festival, Oppikoppi, Splashy Fen, Woodstock, and the Emerentia Festival, to name but a few. Naidoo has performed and continues to perform with some of South Africa’s finest musicians across all genres.

He recently collaborated with legendary South African musicians, Sonny Pillay and Hugh Masekela for a series of concerts which, sadly, were one of Masekela’s last public performances. Naidoo has written and performed a large body of original music.