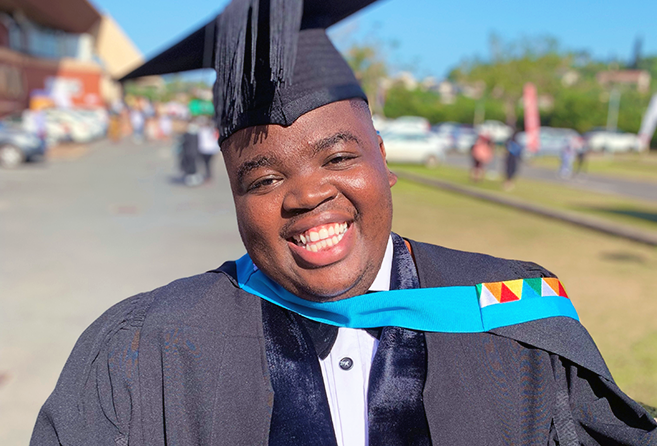 Recording gospel artist, Mr Lwazi Khuzwayo was ecstatic to graduate from UKZN with his Bachelor of Arts in Music.

His song has been featured on Apple Music’s “Mzansi Gospel” playlist for the past eight months after its release. His music video exclusively premiered on TRACE Gospel, featuring on the Hit 30, Hits & Lyrics and Hits Non-Stop playlists. The music video shot to number 1 on One Gospel’s Top 10 countdown.

Khuzwayo hails from Nkandla, KwaZulu-Natal. The song which Khuzwayo co-wrote with his friend, Mr Lindokuhle Moloi, was composed after an intense worship session at his church when his friend, Mr Zwe Kunene, started playing a chord progression along with a melody.

‘This Music degree means so many things to me. It shows how anything you put your mind to is possible. This started as a dream and now has become a reality. I am looking forward to becoming a music educator and the many lives I’m going to impact,’ he said.

Khuzwayo advised emerging artists and students saying: ‘The most important thing to do is to start. You will never know how it will turn out unless you try. Don’t be afraid to consult those who came before you if you don’t understand. The journey will be like a rollercoaster, but when the tough times come, keep your head held up high and have faith that there’s light at the end of a tunnel.’

Of his future plans, he said: ‘I am planning on releasing new music under my own recording label LK Music, do more shows, and so much more. I also have a strong passion for harmony so I am working on my vocal series which will be available on all of my social media platforms.’