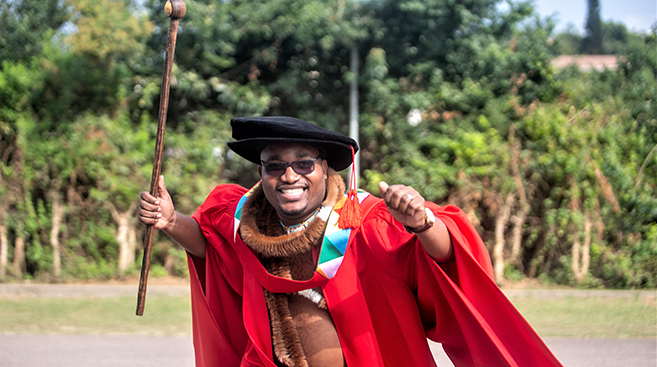 His study investigates public participation within SABC radio stations using the talkshows Sithakela Isizwe on Ukhozi FM and The View Point on SAfm as case studies.

‘Radio, around the world has always been and remains one of the most useful, available, and affordable mediums. Radio has remained relevant and continues to build communities through programming. One of the roles of the media, especially a public service broadcaster such as the SABC, is to create and promote a platform for fair public engagement,’ said Gamede.

‘It is on this platform that citizens behave as a public body, and can confer in an unrestricted fashion, that is, with the guarantee of freedom of assembly, association and the freedom to express and publish their opinions about matters of general interest,’ he added.

Gamede found that the mechanisms of participatory practice, including social media, allowed the SABC to create an accountable virtual public sphere. ‘Radio presenters, producers, and the radio management have an influence not only in programming, but they also have influence on who gets to participate either as a guest or from the public. SABC radio stations need to constantly check and balance between self-regulation and censorship.’

He thanked his family, friends and supervisor for being his support system.

Gamede is a lecturer at Varsity College, an author of the books: The Graduate Pack, a Practical Guide for Job Seekers; Finishing your Qualification in Record Time, a Guide for Students and How to Earn your Degree Online, a Response to the Changing World. He is also the Founder and CEO of Ilada Holdings, a personal development and training company. He runs different youth skills development initiatives such as the Free Mentorship at the Park Programme.