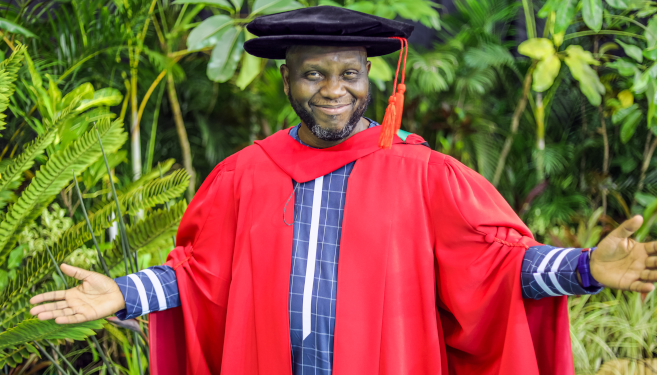 Dr Lawrence Ogunsanya graduated with a PhD in Town and Regional Planning.

He achieved his dream of getting degrees in the three main disciplines of the built environment: Architecture, Housing and now, Town and Regional Planning. ‘This is very rare on the continent of Africa and globally for one person to have a degree in all of the three Disciplines,’ he says.

For Ogunsanya, the PhD journey was long and arduous mainly because of his administrative duties, lecturing, professional practice and family responsibilities, however, he is thankful to have completed the degree.

Speaking about his research, he said: ‘The University has been in existence in different forms for over a millennium and has contributed in numerous ways to modern society. This study investigated the impact of university campuses on the built environment of their local communities in three distinct spatial contexts - township, rural and urban. The study’s contribution to knowledge is an applicable framework used to assess the impact of universities on neighbourhoods through 18 diverse factors.’

Ogunsanya considers universities as the centre of culture, aesthetic direction and moral forces shaping the civilised society. He sees universities as also contributing in important ways to the economic health and physical landscape of neighbourhoods and cities, serving as permanent fixtures of urban economy and the built environment.

‘Due to the size and location of university campuses, they put demands on the urban character, systems, and infrastructure of the neighbouring communities. These demands or impacts have substantial implications for the built environment. It is important to understand the impacts university campuses have on their surrounding communities and urban environments because the destiny of the university is inextricably linked to the destiny of the adjacent neighbourhoods,’ he explained.

Ogunsanya proposes an impact assessment framework for further investigation in the study of university campuses and neighbourhoods in their geographical locations. He revealed that the campus and neighbourhood relate and co-exist in different ways and are mutually dependent on each other. ‘The university campus is more than a precinct which accommodates buildings and academic endeavours, the role of the university in this century has changed dramatically from its traditional roots of being an elite enclave of academics to a more inclusive and engaged entity that is concerned about providing relevant holistic solutions to society’s current challenges.’

He recommends the encouragement of strategic partnerships between the university campus, local government, community as well as informal trade industry.