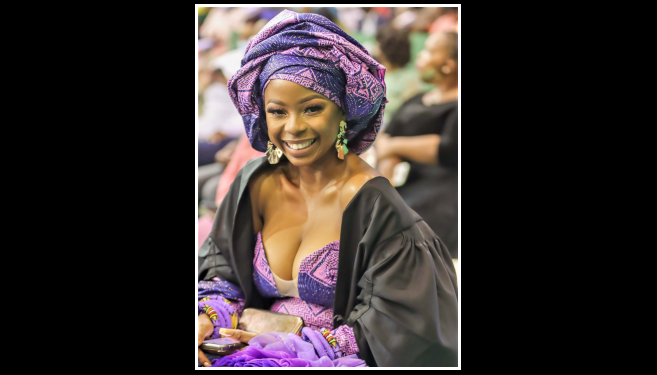 ‘I am thrilled to graduate from UKZN again,’ she said.

Madela also holds a Bachelor of Social Science degree in Community Development and Psychology from the University.

She recently released her first experimental nine-track music project called Iduku Ep that emanates from her cultural background and her hometown of Sundumbili, in Mandeni. ‘Iduku Ep is inspired by the actual headwrap or doek. As it has many functions, it also tells many different stories and represents strength and power. I enjoy wearing iduku and it is part of my image,’ she said.

Madela has been featured by various artists such as Robbie Malinga, Dr Rebecca Malope and Naima Kay. She has also done covers and travelled around the country performing. She is known as e-Kasi Queen because of her African-style music (Maskandi-Soul) and her image.

Being at UKZN and being part of Arts student-led organisations, she strongly believes that the performing arts has the power to bring about social change. ‘Being an artist has made me a social activist. I always make it a point to educate, inspire and empower through my art. I am an art development advocate. I believe in edutainment and in social empowerment through art development.’

Of her future plans, Madela said: ‘I plan to have a music tour where I perform only in museums.’