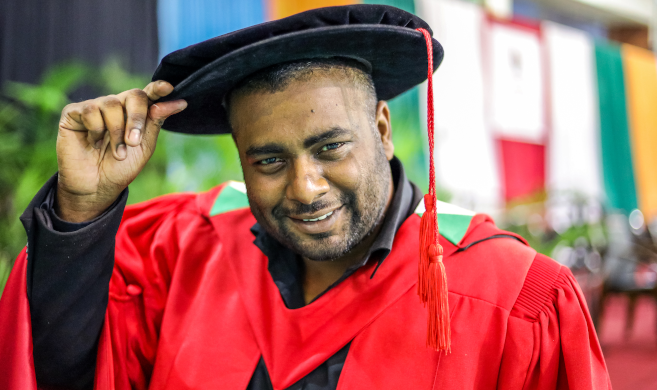 A lecturer in the School of Built Environment and Development Studies, Dr Viloshin Govender graduated with his PhD in Architecture for his research which explored the role of Adaptive Reuse Design Strategies in the Creation of Sustainable Urban Environments using the Durban Point Precinct as a case study.

His key contribution to urban renewal is the development and testing of a novel and participatory framework to redesign and readapt existing buildings and lost spaces to the residents’ needs.

Govender identified that in Durban, the apartheid planning legacy led to the creation of various development nodes within the city, which are most often developer-driven and do not cater to the needs of existing communities. ‘The resultant effect is the lost and insurgent space created between urban nodes within the city. Insurgency can be seen in the form of informal settlements, self-help housing and urban homesteaders (squatters and homeless people using private property or government land). Socio-cultural segregation, urban despair, insurgency, and lost space now exist between these nodes,’ he explained.

Govender pointed out that: ‘Adaptive reuse of buildings embraces a different dimension of sustainability by extending a building’s life and reducing the overall carbon footprint. Low-carbon emissions are a key component towards creating sustainable urban environments and in turn contribute to mitigating the consequences of climate change.’

He noted that often, regeneration projects result in gentrification ‘and to prevent that, it is crucial to ensure that regeneration plans meet the needs of all residents, especially the urban poor. Such an approach forms part of sustainable urban regeneration, with social and economic benefits to society. To develop sustainable urban neighbourhoods, all stakeholders and inhabitants need to be meaningfully involved towards creating resilient cities.’

Govender’s research can help promote mutual understanding and empower design professionals, developers, local authorities, and communities to use collaboration techniques such as community collaboration and the bottom-up approach to co-design solutions for building adaptability that responds to all users’ needs.

He thanked his family, friends and supervisor, Dr Claudia Loggia, for being his support structure.