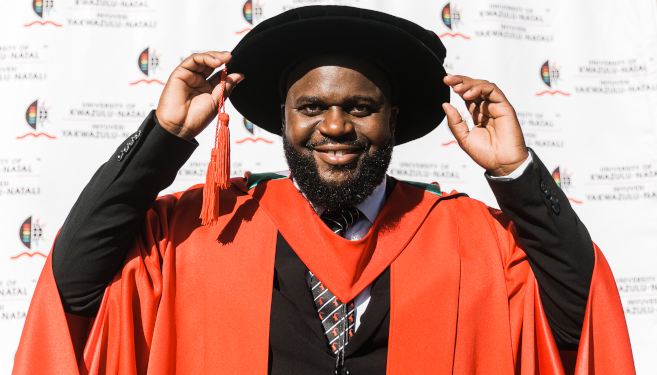 Dr Takunda Mathathu graduated with a PhD in Sociology.

According to Mathathu, women and men are affected differently when it comes to natural disasters. He noted that ‘as a result, the aftershock effects are more severe for women due to social processes that produce and reinforce gender roles within a patriarchal context. These gendered roles and practices often become breeding grounds for high incidences of gender-based violence in post-flood situations.’

He argues that scholarship from a gendered perspective is limited on the varied social implications of floods and that researchers have failed to capitalise on the social consequences of floods from a gendered perspective. ‘Gender is not considered essential in the wake of a natural disaster. Yet gender is a significant intersecting determinant of women’s vulnerability, which translates into the widespread prevalence of domestic violence in the aftermath of a flood,’ he said.

Mathathu calls for the public, private and NGO sectors to consider gender dimensions when assisting communities so that women do not become “double victims” of disasters and pandemics. He noted that the number of women who die due to natural disasters (from the onset, during and after) is always higher than that of men, an area that calls for gendering of the early warning systems and disaster management approaches.

He added: ‘Societal processes play a key role in maintaining the silent culture around GBV especially within rural areas whereby wives are strongly discouraged from reporting perpetrators of GBV.’

The findings of his study showed that women’s social and financial vulnerability is exacerbated in the post-flood period due to loss of property, livestock, livelihoods and marriage breakdowns.

‘Floods have a severe effect on women, not just in their reproductive activities but also in their roles as caregivers for their families. The conditions characterising the flood temporary shelters in rural areas such as overcrowding, poor sanitation, sexual abuse and lack of security amongst many others exacerbate women’s vulnerability,’ he said.

Mathathu is grateful for the support from his family, friends and supervisor.

Advising other scholars, he said: ‘Build a strong network of supportive friends and have time management skills to guide you through these challenging times of self-discovery. Be courageous because there will be moments when you will want to give up, but the results will make it all worthwhile in the end.’

Mathathu is currently working on publishing some articles from his research findings and hopes to find a permanent job soon.