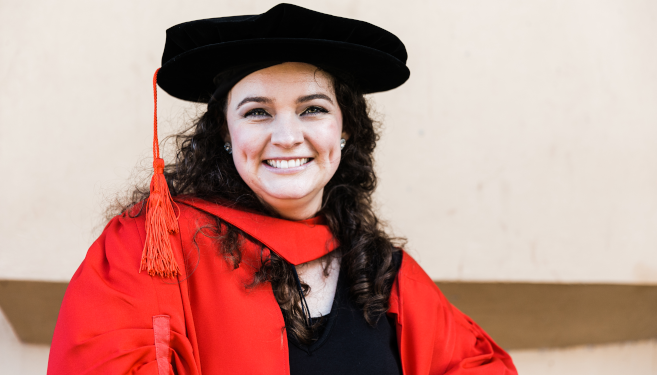 Unlocking the Past by Encountering History Through Museum Theatre

Dr Stephanie Jenkins recently graduated with her PhD in Drama and Performance Studies for her study that explores the use of museum theatre as a means to teach, learn about and interrogate past narratives through the use of performance in places of historical significance.

Jenkins adopts a case study approach, using a self-written and directed museum theatre production Beer Halls, Pass Laws and Just Cause in the KwaMuhle Museum (former Native Administration Department) in Durban. Through the creation and staging of the museum theatre production specifically aimed at Grade 11 learners who are taking the subject of History, the performance adopts an experiential learning approach that engages the senses, minds, bodies and emotions of the attendants.

The study additionally sought to explore the use of arts-based methods such as drawing, poetry, and the handling of objects alongside performance to use as creative, pictorial and tactile ways to engage with historical learning rather than relying only on facts.

‘Education plays a big part in how people see the world and themselves in it. Museum theatre is a powerful tool to encourage alternative ways of learning that include the learner in the history they are studying. Through such performance, learners are prompted to care about the past and explore how it influences their present. The past is not static and the way we learn should not be either,’ explained Jenkins.

For her PhD, Jenkins was also awarded a National Research Foundation (NRF) grant linked to the Narratives of Home and Neighbourhood research project in the Urban Futures Centre (UFC) at the Durban University of Technology.

Advising other scholars, she said: ‘Postgrad research is like surfing a wave. As you surf up, doubt can creep in and it can get overwhelming. Then you begin the wave’s descent, gliding through moments of great insight and inspiration. Another wave begins and it starts all over again. Ride out the frustration, each wave at a time, and the commitment will get you to the end point. Then you see the view and it’s worth it.’

Jenkins is thankful for the support received from family, friends and her supervisor. ‘I am grateful for all the support and listening ears that so many people have given me. I appreciate my parents’ unwavering belief in my studies even when others told me I was studying too much and should move on with my life.’

Talking about her future plans, she said: ‘I have been accepted as a 2022 Writing Fellow at the Johannesburg Institute of Advanced Study. I am going to research and write a new play in a museum in Johannesburg.’