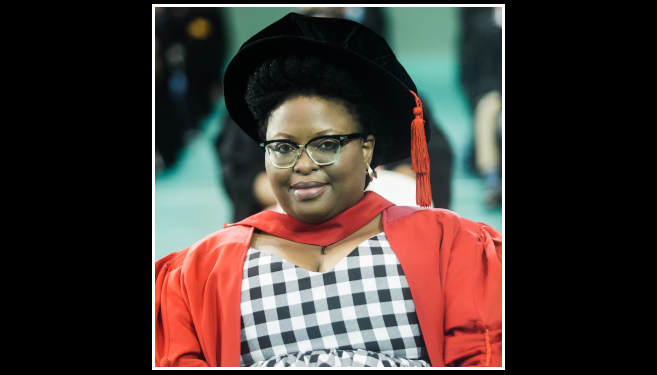 Inspiring and cultivating the entrepreneurship mind-set among her students is what drives UKZN academic and PhD graduate Dr Lindiwe “Malindi” Kunene.

‘This qualification positions me as one of the leaders in entrepreneurship, specifically for Black-owned businesses which are often challenged. It gives me a seat at the table where policy and legislation are formulated as it’s a long-life dream to be part of solutions for the betterment of my province, country and continent,’ said Kunene.

The Management and Entrepreneurship lecturer’s research on entrepreneurship, business and innovation strategy and small, medium, and micro enterprises (SMMEs) has been published nationally and internationally.

‘In KwaZulu-Natal, as in the rest of South Africa, SMMEs are at the heart of the economic development agenda and fast-moving consumer goods (FMCG) industries are a significant part of the economy and poorly planned for in Black businesses,’ explained Kunene.

She added that it is argued that FMCG-SMMEs can accelerate economic growth as they provide essential goods on demand at all times, even during pandemics like COVID-19 and in the face of poverty.

‘The study offers a number of recommendations to the government, entrepreneurship development agencies, researchers and FMCG-SMMEs themselves,’ said Kunene. ‘Lessons were learned on brand naming practices that were never recorded in the Eurocentric theories we use and apply. I aimed to identify constructs specific to South Africa in order to redefine the reality of our context in brand naming for SMMEs.’

Kunene, who is deservedly nicknamed “Ingqwele (The Champ)” by her uncle based on this achievement, is as active outside the classroom as she is in her research. She was recognised as one of UKZN’s Outstanding Female Academics for serving on the Board and as Chair of KUMISA, a non-governmental organisation (NGO) that supports the economic development of the music industry in KwaZulu-Natal.

She is also a member of the Board of the P.E.A.C.E Foundation Trust, an NGO that aims to prevent the slaughter of elephants and rhinos in Southern Africa by promoting economic development among rural communities in areas adjacent to the threatened species. She also served as Convener for Student Entrepreneurship in Higher Education for South Africa’s 27 Universities. In this role Kunene worked with colleagues across these universities in the country to help develop institutionalisation mechanisms for student entrepreneurship in South African Universities. She also serves in UKZN’s Student Entrepreneurship Committee (SEC) tasked with student entrepreneurship development at the institution

While the PhD will enhance her academic career, it also has personal significance as it is a tribute to Kunene’s late father Mr Stanley Kunene who was an academic in Psychology at the University of Zululand from the early 1970s until his retirement.

‘Growing up with Bra Stan as a father and being socialised in academia was the best gift I have ever had. I literally grew up in the lecture halls of the UniZulu campus being exposed to academics and attending lectures where students were being taught by my dad. Coupled with having a mother who was one of the first female high school principals in Northern KZN in the 1980s guided me onto the academic path and played a huge role in what we are celebrating today.’