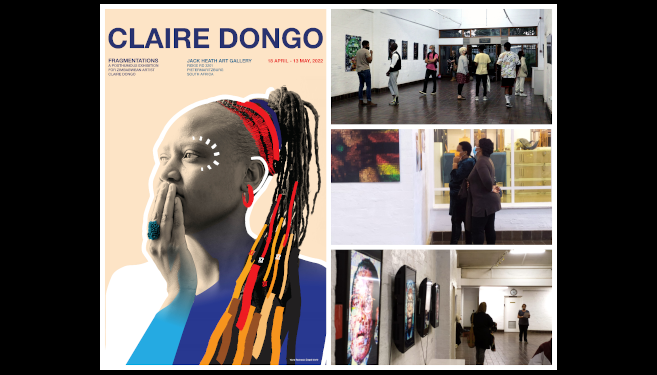 Ms Claire Dongo’s posthumous works on display at the Centre for Visual Art in Pietermaritzburg.

School of Arts Pays Homage to Lecturer with Posthumous Exhibition

The School of Arts (Digital Arts) paid tribute to lecturer Ms Claire Dongo by hosting a posthumous exhibition of her PhD creative work in her honour.

Dongo was one of Zimbabwe’s leading creatives and digital artists who lost her battle with Lupus. The exhibition will run until 13 May at the Jack Heath Art Gallery at the Centre for Visual Art on the Pietermaritzburg campus.

Dean and Head of the School Professor Nobuhle Hlongwa sponsored the exhibition to celebrate Dongo’s works and her life.

Dongo’s research focused on the fragmented image in 20th and 21st century art practice. She had more than 15 years of experience in both the commercial and educational sectors of digital art. She was extremely passionate about mentoring talent. She specialised in digital animation and produced an award-winning short animated film titled Amoeba.

Before joining UKZN, Dongo taught at Vega and the Zimbabwe Institute of Digital Arts and worked extensively in the industry as a graphic designer and 3D animator. Her diverse expertise in the digital arts straddled new media art, animation, graphic design and digital image making. This is evident in her filmography and in the works on exhibit. Also significant was her political and social awareness. Her sense of humanity and humanitarianism underpins most of her work.

Lecturer in Digital Arts Dr Michelle Stewart said, ‘Claire will be remembered for her grace, wisdom, determination, and quiet strength. She was utterly dedicated to her students and fiercely loyal to this discipline. Despite her consistent ill health, she would take on anything she was asked to do and more - she was a rock and a pillar of strength. Many do not know how much she suffered with ill health, as she seldom complained and would turn up against all odds. On the rare occasion during online teaching, she relented and asked one of us to fill in - this only when she was too ill to even speak. Yet she would still log on to listen. Her commitment was unyielding.’

Dr Yane Bakreski added, ‘Life can be so illogical at times, rest in peace Claire. Your memory will never be forgotten.’ Her mother Stella said, ‘We are heartbroken to lose her but believe heaven has gained a bright star.’

At the time of her passing early in 2022, she was wrapping up production on a commissioned 2D animated film called Zimbabwe’s Sad Story. The film is about Hopewell Chin’ono, an award-winning Zimbabwean journalist and documentary film maker who is noted for exposing corruption in Zimbabwe and for his detention by the Zimbabwean authorities without bail.

In 2018 Dongo’s digital installation The Many Faces of Bob was selected for the International Symposium for Electronic Art (ISEA), one of the most prestigious and longest running international electronic arts symposia. Her work for ISEA portrays a series of fragmented portraits of Robert Mugabe from the 1960s to the 1980s and is made up of photographs and videos documenting his political life. The series reflects his fall from grace from a cherished icon of independence and freedom to a corrupt and reviled dictator.

In 2020, Dongo was among 30 artists shortlisted for a United Nations (UN) funded exhibition in association with the International Labor Organization’s (ILO) Green Enterprize Programme. Her work - entitled The Many Faces of Green Labor visually and conceptually explores the phenomenon of Chatbots and their negative and positive impact on jobs.

Another significant work is the #I’mStaying piece for the #I’m StayingMovement - an underlying message of hope and reconciliation. This work has been well documented on Facebook and has become a symbol for the movement.