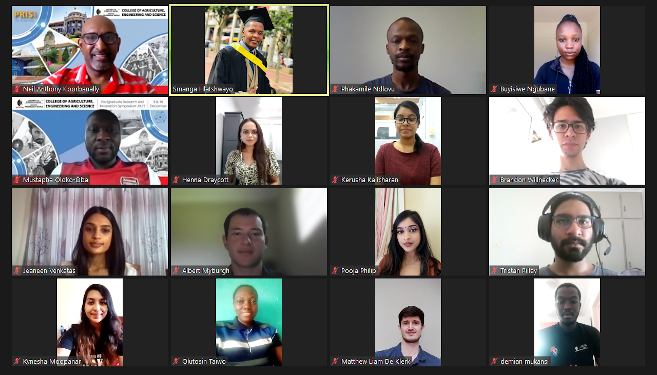 Winners of the best oral presentations across the five Schools in the College of Agriculture, Engineering and Science.

Symposium Showcases Top UKZN Research and a “View on the Universe”

A UKZN online symposium gave participants insight into the mysteries of dark energy, and dark matter that assists galaxy formation as well as details about particles and forces in physics.

It was UKZN’s College of Agriculture, Engineering and Science’s (CAES) annual Postgraduate Research and Innovation Symposium (PRIS) where glimpses into the secrets of the universe were revealed in an address by Professor Neil Turok, the first Higgs Chair of Theoretical Physics at the University of Edinburgh in the United Kingdom (UK).

There was also a memorial lecture to honour one of South Africa’s leaders in sanitation, and presentations of students’ best research.

The two-day event, held online via Zoom, comprised a day of student oral presentations and industry sessions, and a second day of shorter flash presentations.

‘PRIS showcases the cutting-edge research carried out by our postgraduate students in all spheres of science,’ said Professor Neil Koorbanally, CAES Dean of Research.

Koorbanally encouraged postgraduate students to make the most of the opportunity to gain experience in communicating to a wide audience.

Turok, who shared his perspectives on the universe from his decades-long career and the application of mathematics to understanding the universe’s origins, was born in South Africa and schooled in the UK, gaining his PhD from Imperial College London. His early experience includes teaching in mission schools in Lesotho before walking the halls of Princeton University and the University of Cambridge as Professor of Physics and Chair of Mathematical Physics respectively. He also holds the Niels Bohr Chair at the Perimeter Institute for Theoretical Physics in Canada and founded the African Institute for Mathematical Sciences (AIMS) in South Africa.

Turok’s collaborations with UKZN have included work with academics in the Astrophysics Research Centre, in genetics, and in quantum physics.

‘One of my goals is to see this mathematics and mathematical science brought back to Africa so that Africa becomes a world leader again in that field,’ said Turok. ‘There is every bit as much talent in Lesotho villages as there is in London, England.’

Turok tackled the vast topic of the universe, highlighting its simplicity. He gave insight into the mysteries of dark matter that assisted galaxy formation, and dark energy, and detailed the known particles and forces in physics that he said are sufficient to explain everything.

More than 20 organisations, institutes and companies which sponsored proceedings and prizes spoke about their unique work and opportunities during a parallel session.

On the second day of the Symposium, 200 guests attended a presentation by Mr Neil MacLeod, former Head of eThekwini Municipality Water and Sanitation, and UKZN’s Professor Cathy Sutherland to honour the memory of the late Professor Chris Buckley, a luminary who led UKZN’s Water, Sanitation and Hygiene Research and Development (WASH R&D) Centre for over three decades, growing it into an internationally-recognised, transdisciplinary research hub driving innovation in water and sanitation systems in Africa and beyond.

MacLeod shared the story of WASH R&D’s work over the decades to demonstrate the need for transdisciplinary research into the development of toilet technology, the inequality in access to sanitation, circular economy thinking, phosphorous resources and urban development.

Sutherland discussed Buckley’s contributions and approach towards transformative sustainable development, working both on resource recovery from centralised and decentralised systems with a strong interest in the social and the environmental cost of both.

The PRIS concluded with a prize-giving session where the top three presentations from each School in both the oral and flash presentation categories were rewarded*, with a special prize in each category for the research that demonstrated the greatest impact, per School, based on voting from the audience. There were also several lucky draw prizes awarded by the event sponsors.

In closing, Modi emphasised the College’s pride in the quality of students’ research, and lauded the efficiency and resilience people had shown in undertaking research through the COVID-19 pandemic.

Koorbanally’s vote of thanks included the planning committee, the Moodle team, the technical committee, social media and website champions, the Information and Communication Services technical support team, the CAES management, session chairs and co-hosts, internal and external judges, the Discipline of Computer Science for providing venues for the livestream as well as equipment, and the Public Relations committee. He also recognised the companies and organisations that sponsored and exhibited at the event.

First place winners in the oral category received a HP 15 8GB Notebook with Intel Core i5 valued at R12 000; second place victors got a Samsung Galaxy Tab A7 valued at R5 000; and for third place: a Western Digital My Passport 4TB Hard Drive and Volkano Python Series Bluetooth Speaker valued at R3 000.

Prize-winners in the new category of the greatest impact on industry, environment and society received a cash prize of R5 000 in the oral category and R3 000 in the flash presentation category; these prizes were awarded based on an audience poll.