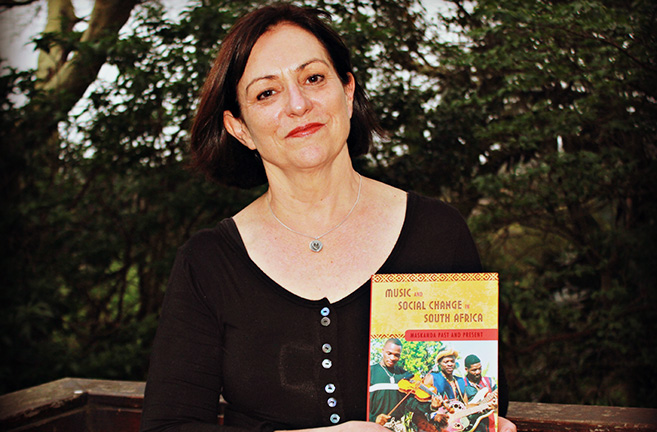 Dr Kathryn Olsen with her new book: Music and Social Change in South Africa: Maskanda Past and Present.

Lecturer in the Music Discipline within the School of Arts, Dr Kathryn Olsen, recently launched her book Music and Social Change in South Africa: Maskanda Past and Present, at UKZN’s Centre for Jazz and Popular Music (CJPM).

Maskanda, a performance practice that emerged in the early decades of the 20th century among Zulu migrant workers, is strongly associated with young Zulu men’s experiences of repression and dislocation during imperial and, more particularly, apartheid rule.

Working closely with translated song lyrics and musical notation and applying musical and socio-political analysis to this music and its cultural context, Olsen argues that maskanda offers insight into how the post-apartheid ideal of social transformation was experienced by those who were marginalised for most of the 20th century.

Drawing on a decade of research, Olsen strives to demystify the Zulu part of contemporary experience in South Africa and to reveal some of the complexities of the social, economic, and political landscape of contemporary South Africa. The book is enhanced by audio-visual material on the Ethnomusicology Multimedia website of Temple University Press.

‘I believe that in order for transformation to be successful we need to engage with individual experience and perspectives in an attempt to seek resonances with our own lives. I target an academic audience in order to claim a space for the local music within the realm of tertiary education and a broader audience in the hope that it brings about a realisation that individual action can be put to work for the greater good,’ said Olsen.

Olsen said while writing the book she was able to work and travel abroad with the late Mr Shiyani Ngcobo who was a master of the genre and who openly shared much about his music, his life and maskanda generally with her.

She also managed to build relationships with musicians central to the study and using academia to give them a voice. The experience of writing the book made Olsen realise it is possible to connect in meaningful ways with those who are so often constructed as “others” in general public discourse.

‘Writing this book was a way of exploring the workings of South Africa in transformation through the uncontrived representations of social experience that are expressed in musical performance. It was also a way of showing how music can work as a meaning-making strategy and hence to give both music performance and the study of it greater value in a world that is obsessed by consumerism.’

The book is available directly from Temple University Press or on Amazon.