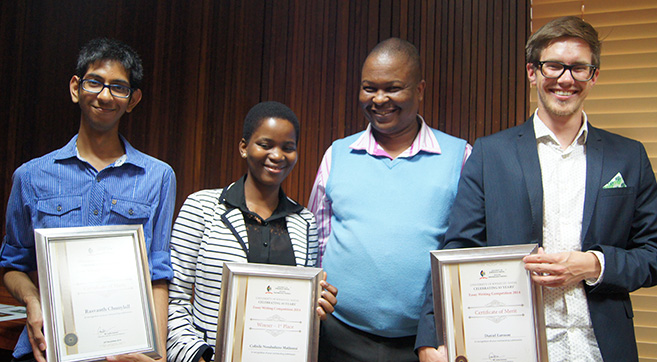 Masters student Ms Colisile Mathonsi has won UKZN’s essay writing competition with her entry which argued that mentoring by means of peer and professional support was a practical way of creating strong and progressive graduates who could be guided towards becoming confident and competent future leaders.

In the competition, held to celebrate UKZN’s 10th anniversary, students were invited to write on the topic: “Ten years in and ten years into the future…Changing spaces, new places and a better UKZN. Your vision shapes the world”.

Executive Director Corporate Relations, Mr Lesiba Seshoka, said 85 students had submitted critical essays offering opinions and strategies to improve physical and operational aspects of the University. The diversity in approach, style, and creative thinking was most impressive!  Our panel of judges had no easy task and each student can be justifiably proud of their thoughtful submissions.

‘Ms Mathonsi’s insight of a strong alumni network and relationship between staff and pupils addressed the commitment we all have to each other as custodians of the University’s mission and goals. We congratulate the students on their achievements and thank them for being proud custodians of UKZN,’ said Seshoka.

Chunylall suggested a greener, more sustainable University in addition to his stance on animal rights.  Competition judges felt his progressive social consciousness was laudable and an example for both staff and students.

Larsson wrote on what contributed towards a healthy, more vital student life suggesting, among other things, healthier food options and improved extramural activities.