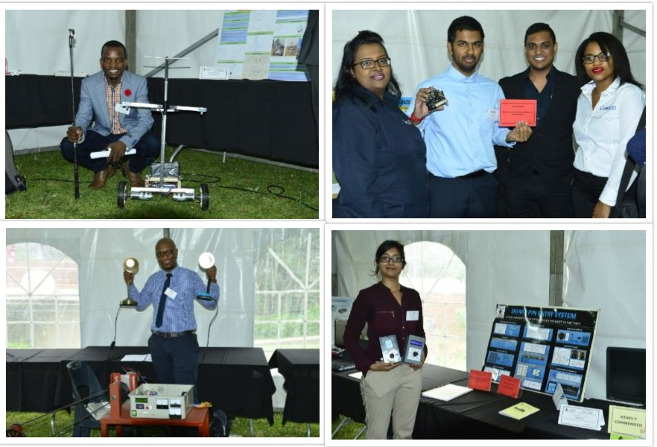 School of Electrical, Electronic and Computer Engineering students at their annual awards function.

The School of Electrical, Electronic and Computer Engineering (EECE) held its annual projects Open Day and awards function at the UNITE Building on the Howard College campus where the designs of final year students were on display.

Mr Elijah Indarjit won the award for the Most Innovative Design Project in Computer Engineering with his project titled: “Gesture Recognition using a Smart Glove”. The project involved a robot controlled by a person wearing a glove who performs hand gestures captured by embedded sensors. An appropriate command is transmitted to the robot which then moves accordingly.

The prize of R2 500 was sponsored by Denel Dynamics.

Indarit also received the Best Final Year Student in Computer Engineering award which carried with it a prize of R4 000 sponsored by the CSIR.

Mr Keagan Govender was the winner of the Best Computer Engineering Final Year Design Project with his exhibit titled: “Combi-CNC” which involved the design and production of a combinational 3D printer and CNC Milling device. In this work a PC is used to control a machine capable of manufacturing three dimensional objects, both by a building up process and a material and material removal process.  The prize of R3 000 was sponsored by the CSIR.

Hansa’s winning project, titled: “Ring Main Protection of a Power System”, was a protection system for the interconnection between power stations, transmission grids and the distribution of electricity. She chose the project because power systems is a major course in Electrical Engineering.