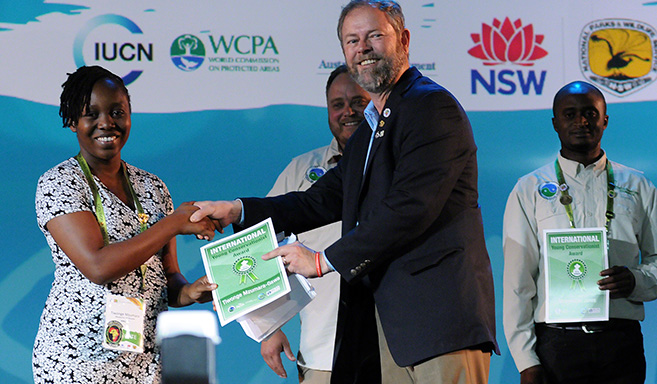 PhD Student is Joint Winner of Conservation Award in Australia

Mzumara-Gawa, who shared the award with Mr Maximillian Jenes from Tanzania, received the honour at the IUCN’s World Parks Congress (WPC) in Sydney, Australia.

The International Young Conservationist Award was instituted to recognise outstanding contributions made by young people through ongoing, extraordinary commitment to the conservation of protected areas. It raises awareness around the work of passionate young conservationists, be they scientists, rangers or community workers, and provides recipients with opportunities to promote their work and to develop networks to support their efforts.

For Malawian Mzumara-Gawa, the award is a fitting honour as it acknowledges her efforts to provide important data to those who manage her country’s protected areas. Mzumara-Gawa has played an important role in bird conservation in Malawi where there is a dearth of information on and popular interest in the activity of birding and conservation.

She volunteers as a Conservation and Research officer for the Wildlife and Environmental Society of Malawi (WESM), which is the Bird Life Partner in Malawi, co-ordinates a garden bird count and works as an Ornithologist for the Museum of Malawi.

The award recognises her instrumental assessment of important threatened and endangered species in Malawi, such as the yellow throated apalis, the blue swallow, vultures and parrots. She is also heavily involved in initiatives to get more young people interested in birds through student involvement, school visits and citizen science.

Mzumara-Gawa was given the opportunity to present at the WPC in Sydney, where she spoke on the topic: “Conserving Malawi’s Birds”, summarising some of the work she is doing in Malawi.

Her presentation highlighted the support she has received from Malawian NGOs such as Mulanje Mountain Conservation Trust and African Parks, Majete, and the government officers in the Forestry Department and the Department of National Parks, as well as international support from small grants, bursaries and fellowships.

‘I feel blessed and honoured,’ said Mzumara-Gawa. ‘It’s humbling to think the work I do in the small country of Malawi can be recognised at such an international level. This is particularly encouraging for the great team of people I work with, because I did not achieve this alone.’

Mzumara-Gawa, who is at UKZN in the final stage of her PhD in ecology under the supervision of Professor Colleen Downs and Professor Mike Perrin, says her passion for conservation is inspired by the ability it gives her to be a voice for ‘beautiful, amazing and important wildlife’. She says she loves being in the wild and in natural habitats.

The focus of her PhD research is on: “The Ecology and Conservation Biology of the Lilian’s Lovebird in Malawi”.

Mzumara-Gawa, who is currently also monitoring vultures and blue swallows as well as assessing the availability of suitable breeding sites for the brown - and grey-headed parrots in Liwonde National Park, says she has enjoyed her time at UKZN being part of the community of postgraduates and academic staff.

Her colleague, Mr David Nangoma from the Mulanje Mountain Conservation Trust who nominated her for the award, said he believed she was uniquely positioned to make a marked change to bird conservation in Malawi thanks to her passion and drive. He feels her contributions will put Malawi on the map in terms of its ornithology and enable the publication of records of the country’s birdlife.

‘Tiwonge has consistently helped update bird lists on Mount Mulanje, a Biosphere Reserve, which is now designated an Important Bird and Biodiversity Area (IBA),’ explained Nangoma. ‘There is a lot that must be done to populate the IBA Database, which I think only Tiwonge will be able to do.’

‘It is my strong belief that a young lady of Tiwonge’s calibre will inspire other young women and youth in Malawi to take up a career in bird research and conservation,’ said Nangoma. ‘By involving college students from our local universities in her studies on Mount Mulanje and other protected areas in Malawi, Tiwonge has proved to be a great mentor. She certainly deserves the award and more.’