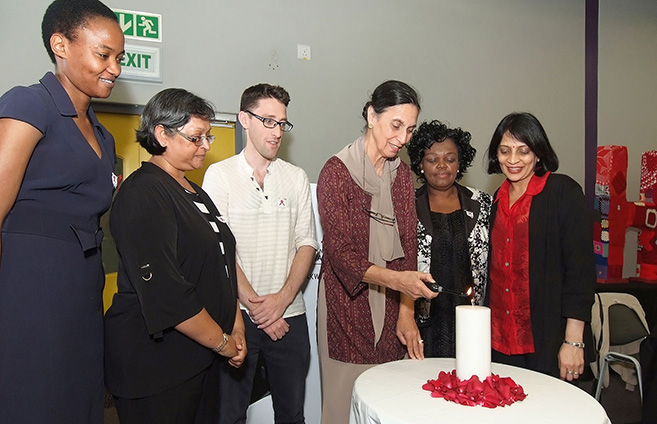 Panellists at a World AIDS Day gathering light a candle in remembrance of those lost to HIV.

In spite of all the advances made in the fight against HIV, KwaZulu-Natal still has the highest rate of infection among women anywhere in the world.

This is according to the Associate Director of the Centre for the AIDS Programme of Research in South Africa (CAPRISA) Professor Quarraisha Abdool Karim, an international leader in HIV research.

Abdool Karim was speaking at a panel discussion hosted by the College of Health Sciences, in collaboration with K-RITH, CAPRISA, HEARD, the Medical Research Council and Health Systems Trust to commemorate World AIDS Day (WAD) 2014.

WAD focuses on remembering those lost to the epidemic and also on the mobilisation of resources to advocate for people vulnerable to and living with HIV. 2014 marks a decade since the World AIDS Day theme of: “Women, Girls, HIV and AIDS”.

The panel discussion was held to share knowledge drawn from biomedical science, social and behavioural studies and community perspectives on the persistent vulnerability of women and girls to HIV infection, a topic which forms the nexus of multiple health, cultural and development issues.

Emeritus Professor in Paediatrics and Scientific Advisor at UKZN’s School of Clinical Medicine, Professor Miriam Adhikari, opened the discussion around how to reduce the burden of HIV on women and girls, and good practice models for protecting women’s sexual and reproductive health rights.

Framing her remarks within the lens of preventing HIV infection in young women as a key challenge to ending AIDS in Africa, Abdool Karim noted that although South Africa had transformed HIV and AIDS from a fatal disease to a manageable chronic condition through access to the world’s largest antiretroviral treatment programme, and had almost eradicated mother-to-child transmission of HIV to infants, KwaZulu-Natal still had the highest rate of HIV among women anywhere in the world.

‘There are still many challenges to infant feeding, and the health of mothers is crucial for society’s survival,’ she said. ‘The overarching challenge is that despite many interventions focusing on safe sex practices and voluntary medical male circumcision, young women cannot exercise control over men’s responses to these programmes. Data from South African cohort and population-based studies show that women aged 15 to19 years are being infected by men older than 25. Epidemic control will never be achieved if HIV transmission through these age-disparate relationships is not reduced. Although we have a number of emerging and available tools to address this, we cannot rest until we have a viable HIV vaccine.

‘With prevalence measured at 1% for boys and 9% for girls in the 15 to 19 year age group, transactional sex between adolescent girls and men older than 25 is a significant risk factor, with immature genital tracts making younger women particularly vulnerable to HIV infection.  Pursuing viral load reduction among older men through ARVs can help to lower these infection rates, but the social and economic factors underlying sex in exchange for goods or money require deeper investigation,’ said Abdool Karim.

Andrew Gibbs, a researcher in the Gender Equality and Health Programme at the Health Economics and AIDS Research Division (HEARD), called for radical restructuring of gender relationships to address women’s economic dependence on men and eliminate gender-based violence, especially in domestic settings. The key aspects of such programming were changing social norms and expectations, targeted livelihood interventions for young women and girls, and working effectively with men and boys towards stronger perceptions of gender equality, said Gibbs.

‘Moralising and scare tactics will not support women towards thinking more critically about their sexual health and relationships. We need to help them understand their choices. Reshaping the broader context in which they live is not glamorous or easy, but it starts with building women’s economic empowerment – beyond craft projects and skills transfer – into securing sustainable work opportunities in their immediate environment.’

Work with men and boys had to retain the centrality of women’s and girls’ needs, and recognise the danger of reinforcing the dominant masculine role. ‘Perpetuating the role of men as the protectors of society and family displaces the notion of men and women as equal partners,’ said Gibbs. ‘Global implementation of the Stepping Stones Creating Futures project in both rural and urban settings has demonstrated success in altering attitudes about gender norms in the context of poverty. In Malawi, for example, girls continue to have sex when they were less materially dependent on men, but made different partner choices.’

Research and Community Manager for the South African Medical Research Council’s HIV Prevention Research Unit, Ms Neetha Morar, underlined the importance of understanding the interplay of dynamics between the individual using the intervention, the partner, the family and the community.  ‘Our study participants have taught us that merely issuing a prevention product will not guarantee its usage in a woman’s daily life,’ said Morar. ‘Condoms and microbicide gels are discarded at train stations because cultural and social norms do not support an environment that enables women to use them effectively. We must continue to build partnerships at community level, and ask for women’s guidance as to why certain means and methods are acceptable or not, what fears are associated with vaccines, and how we can help them to make prevention choices that they can sustain in their homes.”

Adhikari noted that work with and within families – teaching both sons and daughters to respect all women – laid the foundation for public health programme implementation to be effective.

Health Systems Trust’s KZN Co-ordinator for the South African Sustainable Response to HIV and AIDS (SA SURE) project, Ms Sibongile Shezi endorsed this view, saying that the focus should be on empowering couples and not only individuals. Shezi’s work has highlighted that empowering women is not about power over men, but about power with men, in families and communities.

‘Why, in this age of robust prevention programmes and with women needing and demanding their own forms of protection, is condom uptake so low? she asked. ‘We have made gains in prevention of mother-to-child transmission, but women are not booking for antenatal care at clinics before 20 weeks of pregnancy.’

Turning back to biomedical options for reducing HIV infection among women and girls, a Postdoctoral Fellow at the KwaZulu-Natal Research Institute for Tuberculosis and HIV (K-RITH), Dr Jenniffer Maroa, confirmed that uptake of and adherence to prevention interventions remained challenging. ‘The only clear path to eradication of HIV is a vaccine,’ she said. ‘To this end, we’ve established that antibodies can block a freely existing HI virus, and we are now working on the use of antibodies to block a cell-based virus. We also need to know more about the differences in women’s and men’s mucosal immunity. So far, we’ve isolated “broadly neutralising antibodies” that can recognise the different virus strains and binding spots, and are hopeful that we can build on this knowledge to develop an effective vaccine.’

Dr Elizabeth Lutge of the Department of Health said the Department valued its partnerships with researchers and appealed to research programmers to involve health workers in their studies.

Ms Helga Koch of UKZN’s Department of Occupational Therapy called for intervention strategies to incorporate the needs of HIV-positive people with disabilities within a community framework.