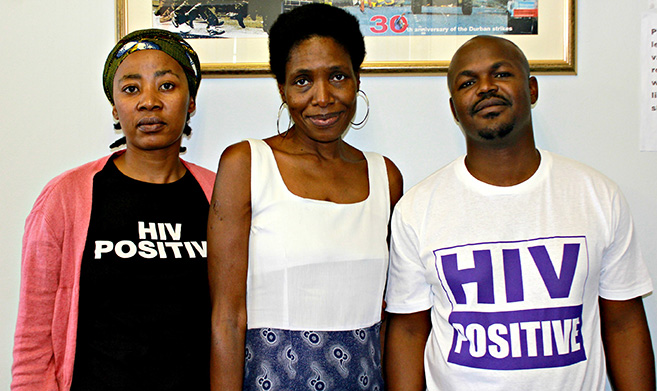 The trio said the lives of millions of South Africans living with HIV had been saved because of the tireless campaigning of TAC over the years.

Prior to the organisation’s formation in 1998 and the breakthrough in acquiring generic medicines in 2004, anti-retrovirals (ARVs) were mainly only available to the wealthy.  Access to ARVs had led to a rise in life expectancy in South Africa from 52 in 2004 to 62 today.

The speakers said TAC was facing a financial crisis and they believed it was vital to assess its role in society’s health system and civil society advocacy leadership.

Dubula asked whether historic breakthroughs achieved because of AIDS activism would be updated and renewed or would the TAC become a casualty of donor fatigue and recent funding whims?

‘We need to find resources from within our own movements, both nationally and internationally, to fund social justice activism, breaking our dependence on donor governments. The reliance on donor funding has been both a blessing and a curse. While it has provided the resources to tackle important issues, it has also made civil society organisations vulnerable to the accusation that they are imposing foreign ideas and agendas on local populations.

‘No matter how absurd these claims, they have been damaging in the war of ideas in which human rights are a critical concept. There are a number of interesting alternatives emerging now, including raising independent domestic resources for difficult activism from Africa’s new wealthy billionaires and from membership associations,’ said Dubula.

‘KwaZulu-Natal is the hardest hit by the HIV/AIDS epidemic. The province remains the epicentre with an HIV prevalence of 16.9% and it is even higher among women of reproductive age where the prevalence is 27.9%. The message we must convey to all the people of KwaZulu-Natal and South Africa and international partners is that whilst we have made substantial progress, we cannot afford to be complacent.’

Zondi believes that activism is needed to monitor and hold to account those responsible for implementing policies. ‘We need to ensure that there is transparency because corruption at all levels of government is killing poor people in our country.’

Stemming from her own personal struggle and dealing with the country’s health system, ka-Manzi praised the efforts of activists and the TAC but - within the context of proper functioning transparent health systems - criticised the government for failing its needy citizens. She tackled the “missing link” at ARV dispensing clinics for the poor and recounted how waiting in long queues could dishearten the sick and poor even further.

‘My complaint is that because of the lack of manpower, the procedure being followed now is to dish out ARVs and not to look after the medical welfare of the patients. However, I must commend the health workers in ARV clinics who go out of their way to serve us regardless of the challenges they themselves are confronted with.

‘They are faced with people who default both in taking ARVs and TB medication. It must be so disheartening for them to have seen a patient recovering then reverting back to a weak immunity.’

The audience became involved in the debate raising issues of concern about the country’s health system.