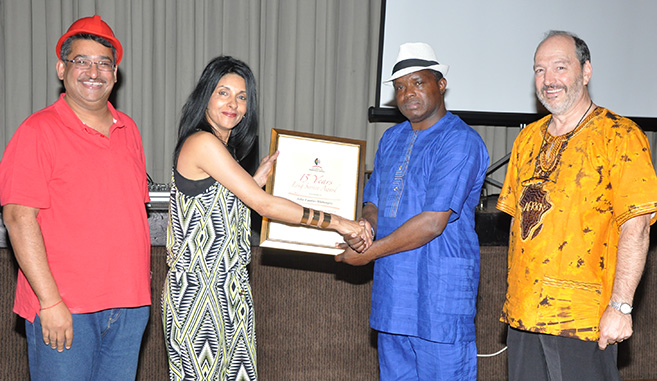 The celebratory event which was organised by the office of the College Director of Professional Services saw over 250 College staff members embrace the day’s theme:” A’lter e’go (Latin), One’s other self” as they came dressed in interesting  outfits ranging from Cleopatra, the queen of the Nile to the Grim Ripper.

The rationale behind combining the two events was to encourage staff members to interact in a less formal setting thus fostering the spirit of team work and award excellence in research, teaching and learning and the newly introduced professional support services as well as to recognise staff for their commitment to the University.

In his address, Deputy Vice-Chancellor and Head of College, Professor John Mubangizi who was also a recipient of a long service award for his 15 years of service, applauded the staff for their dedication towards ensuring that the College reached its milestones including an improvement in research productivity.

‘The function is also intended to be a celebration and acknowledgement of the effort and the hard work of all those involved in the management and leadership of the College. Altogether these people have put in more than 440 years of service to this Institution.’

‘These people are capable of working anywhere but they have dedicated their years to UKZN and we thank them for their hard work and effort they have put in at the College. We also want to acknowledge and recognise those academics who distinguished themselves as the most productive researchers in the College. Today’s function is an occasion to celebrate the resilience of this College. So, we are celebrating your resilience – each one of you,’ said Mubangizi.

To ensure that every one was in a jovial mood, the Master of Ceremonies Professor Kriben Pillay lived up to his reputation of being the master of illusion with his amazing magic tricks as well as kept the guests entertained with his comedy routines.

Amongst the research highlights was the Research Productivity Award which was awarded to School of Law academic, Professor Shannon Hoctor for being the most “productive researcher in the College in 2013”. School of Management, Information Technology and Governance academics Professor Betty Mubangizi and Dr Irene Govender were also recognised for their new “NRF ratings as established academics”.

The Research Impact Award for the “most cited academic paper” went to School of Accounting, Economics and Finance academic Dr Harold Ngalawa while the “Research Funding Award” for the most funding sourced by an individual academic in 2013 was awarded to Mr Marcel Kohler who generated over R2 million rand in funding.

College academics Dr Shaun Ruggunan, Ms Vanessa Tang, Dr Upasana Gitanjali Singh and Mr Samuel Douglas Engelbrecht, were recognised for participating in the Teaching and Learning Forums, where the presentations given lent themselves to further research and publication and served teaching and learning in the College.

Support staff were also awarded for their invaluable contribution to the College through the Professional Services.

After the formal presentations the dance floor was opened as the staff from the College displayed their dancing skills with a dance routine but it was the staff from the office of the Director of Professional Services’ spectacular dance interpretation to the hit song Waka Waka that earned a standing ovation.

The College is looking forward to a bigger and better event in 2015.