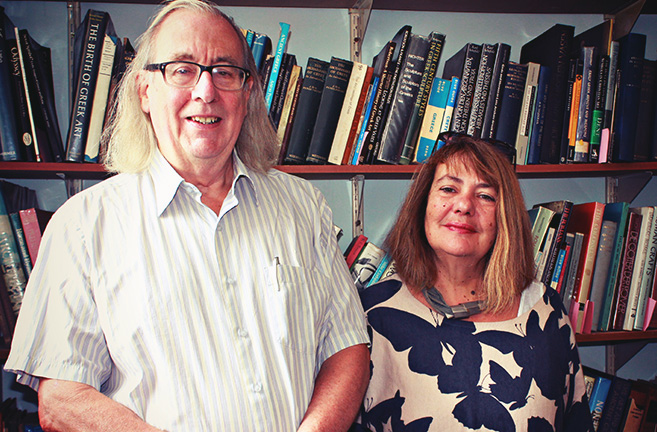 The Classics Discipline within the School of Religion, Philosophy and Classics (SRPC) recently hosted two international scholars who presented papers on Greek culture in Arrian’s Bithynia and Xenophon’s Simonides.

Offering an insight into Greek culture in Xenophon’s Simonides, Athanassaki shared an excerpt from her paper stating: ‘In the carefully staged fictitious dialogue between Hieron and Simonides, the poet gives the embattled tyrant a novel and intriguing solution that will put an end to his misery: a good leader, Simonides contends, should use choral competition as a model of government.

‘Xenophon’s views on tyranny and leadership have been extensively discussed by Leo Strauss and recently by Vivienne Gray who argues against Strauss’s influential interpretation. Neither scholar, however, explores the choice and significance of agon and choregia as a model of government.’

Athanassaki addressed all structures of organising competitions as Xenophon opts for choregia as a political model. She further explored whether Xenophon tried to get the attention of Dionysius II of Syracuse, as some scholars have thought, or whether he targeted other audiences as well.

Through a survey of the significance of choral competition in the Xenophontic corpus, she argued that Xenophon opted for the choral paradigm ‘because it offers a collective civic educational model that guarantees the highest standard of discipline, order and expertise; this civic model is a prerequisite of good leadership’.

Through comparison of Simonides’ proposal with Athenian debates on leadership and competition, as reported by Thucydides, Isocrates and [Andocides], Athanassaki also argued that in the dialogue Xenophon does not simply reject the tyrant’s competitive ethos and patronage, but more importantly reflects on the potential abuse of the Athenian competitive model by high-profile politicians.

‘For this reason, I suggest the treatise is a meditation on leadership, competition and megaloprepeia that is intended for all those who wish to avoid breeding would-be tyrants in their cities and especially for the Athenians; in this sense Simonides’ proposal has a preventative rather than corrective purpose.’

Bowie’s paper noted that before Arrian almost all Bithynian cultural eminences were from Nicaea (e.g. Hipparchus, Parthenius and originally Asclepiades, later of Myrleia) and few, if any, from Nicomedia ‘where it is not even clear rhetoric and philosophy were taught, as rhetoric was at Bithynion and philosophy at Prusa.

‘So Arrian may have had his tertiary education at Athens. His subsequent career was chiefly outside Bithynia, as apparently were those of some near-contemporaries, Calpurnius Asclepiades from Prusa, Sacerdos (of AP 15.4-8) and Catillius Macer (honoured in Hadrianic Delphi) from Nicaea. Likewise Nicomedian cultural figures found overseas do not precede Arrian but follow him – the medical philosopher Menodotus, the sophists P. Aelius Samius Isocrates and Quirinus. Nevertheless in the third century Philostratus can still see Bithynia as marginal.’

According to Dr Elke Steinmeyer of UKZN’s Classics Department, the lectures were well received by the audience which led to a stimulating discussion on Greek Culture.