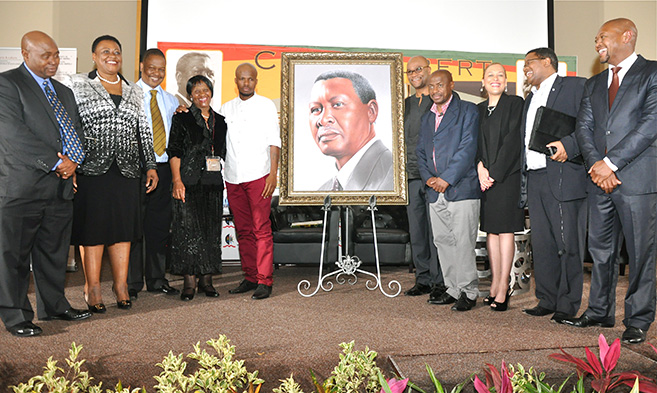 National Minister of Arts and Culture Mr Nathi Mthethwa delivered the 2014 Chief Albert Luthuli Memorial Lecture at UKZN. It was the 10th year the University has hosted the Lecture.

Paying tribute to the life and legacy of ‘a great statesman’, Mthethwa said Luthuli fought for full political, economic and social opportunities for oppressed people of South Africa regardless of colour, creed, nationality or race.

‘Chief Luthuli was a profound thinker, a scholar, a man of powerful logic with a keen sense of justice; a man of lofty principles, a bold and courageous fighter and a statesman. He was a true African nationalist and an unflinching patriot.’

Mthethwa noted the contributions of all those who helped South Africa achieve freedom. ‘Twenty years ago was the culmination of 300 years of struggle that brought us to that point in history where we could say definitively that we had seized the moment and entered a new space and a new time.’

He commended Luthuli for being the first African on the continent to receive the Nobel Peace Prize in 1960 and encouraged South Africans to ‘show the world a new pattern of democracy’ as Luthuli once predicted.

Broadcast live on SABC on DSTV’s Channel 404, a recurring theme throughout the lecture was the mystery surrounding Luthuli’s death in 1967. While the apartheid government declared Luthuli, a former President of the African National Congress, had been struck by a goods train, many have questioned this.

The sentiments surrounding the mystery of Luthuli’s death were echoed by his daughter, Dr Albertina Luthuli and his grandson and Chairperson of the Luthuli Foundation, Mr Mthunzi Luthuli.

Referring to this Memorial Lecture as the most moving of all those in the Luthuli series, Albertina Luthuli said it called into question something which had been uppermost in her mind - the death of her father.

She said the nation was concerned as there had been no closure following his untimely death. ‘It remains an open wound, not just for the family, but for many people,’ she said.

Also speaking at the event, Deputy Vice-Chancellor for the College of Humanities, Professor Cheryl Potgieter, said the University was honoured to be associated with the Chief Albert Luthuli Memorial Lecture. ‘The University’s vision to be the Premier University of African Scholarship commits us to the potential of Africa and to making a vital contribution to the world.’

Potgieter said she hoped the dialogue would inspire the youth to pursue a world of justice and respect for fundamental human rights and inspire South Africa to recommit to Luthuli’s principles.

A joint initiative of UKZN, the Luthuli Museum and the Department of Arts and Culture, the Lecture at the Graduate School of Business and Leadership was attended by members of the Groutville community, academics, students, the media and the public.