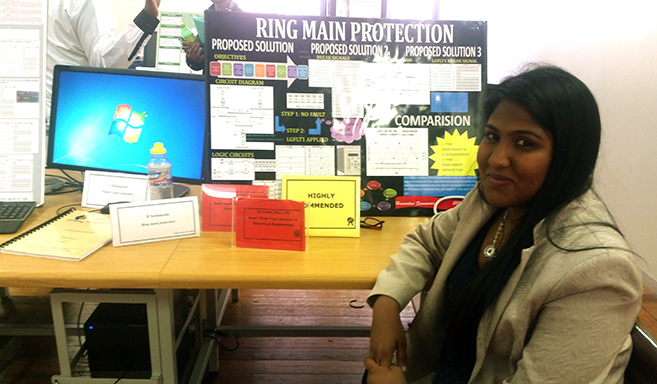 Hansa’s winning project, titled: “Ring Main Protection of a Power System”, was a protection system for the interconnection between power stations, transmission grids and the distribution of electricity. She chose the project because power systems is a major course in Electrical Engineering.

‘Owing to the versatility of the modern era, there is a demand for the continuity and availability of electricity,’ said Hansa. ‘Power system protection offers consumers and industries a continuous supply of electricity even during interconnections between the grid. I chose a power system project in order to achieve the background necessary for my introduction into the industry next year.’

‘It is hard for a woman in a field stereotyped as male dominated. Women have to work twice as hard to prove that their capabilities are equal to those of men’s. It required a lot of dedication and perseverance to be successful and I did not expect to graduate at the top of my class. I am happy that the hard work paid off,’ said Hansa.

Hansa’s Mechanical Engineer brother is her role model who has always motivated her to work hard and persevere through every obstacle in life.

Next year, Hansa will be an Engineer in Training at Eskom.