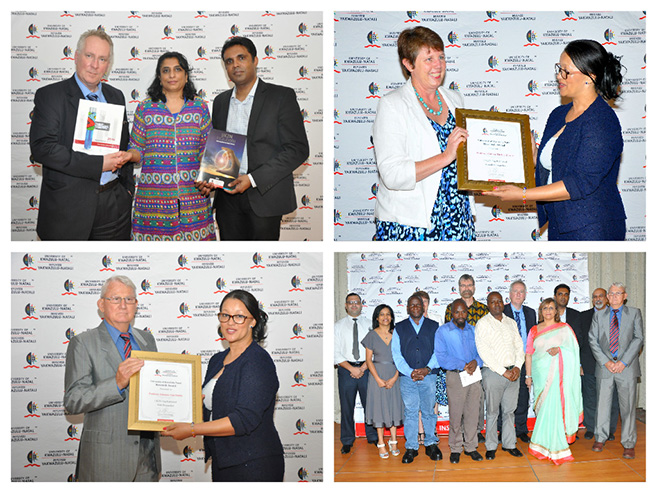 Chief Director: Science Missions at the Department of Science and Technology Professor Yonah Seleti delivered the keynote address titled: “The Value of Indigenous Knowledge Systems in Higher Education in the 21st Century”.

Seleti commended UKZN for being the first university on the continent to have an IKS policy and acknowledged it for committing resources to IKS.

He noted IKS initiatives underway including collaboration with Nestle to make vegetables from indigenous communities available on a global scale as well as current research into treatment for diabetes.

Speaking at the event, Blackledge acknowledged the staggering amount of research being undertaken at UKZN. ‘2013 was a remarkable year for the University whose research productivity was compounded in a steady and sustained growth in terms of the number of publications, the postgraduate research throughput, the funding awarded and the participation in research by staff across the entire spectrum of the institute’s academic portfolio, making the University one of Africa’s premiere research focused centres of academic excellence,’ said Blackledge.

He listed the University’s ‘exceptional’ achievements over the past year. ‘The number of doctoral degrees awarded in 2013 increased by 24 percent compared to 2012, closely matched by an increase of 15 percent for Masters by Research awards.’

Funding from the NRF also increased by seven percent compared with 2012.

‘Indeed, in all aspects of the University’s research portfolio there has been a significant annual rise in research output as reflected in the Research Productivity Units of staff which increased by 13 percent over the same period,’ he said.

‘Further, we are confident that for the second year running, UKZN will be ranked as the top university in South Africa for research productivity.’

Blackledge acknowledged the University’s duty to have a broad teaching and research portfolio that is dedicated to its students and their educational development. ‘Whether we are teaching first year undergraduates, supervising PhD students or mentoring post-doctoral students, as academics in one of the world’s leading universities, we have a duty to our students welfare and educational development. By helping them to the very best of our abilities, we help ourselves.’

Dean of University Research and Programme Director, Professor Urmilla Bob, acknowledged the hard work contained in the Research Report saying, ‘The Research Report is our pride and joy because in that text lies the blood, the sweat, the frustration which made so many research achievements possible.’

Deputy Vice-Chancellor: Teaching and Learning Professor Renuka Vithal delivered the vote of thanks and echoed Blackledge’s sentiments of the strong connection between teaching and learning and research.