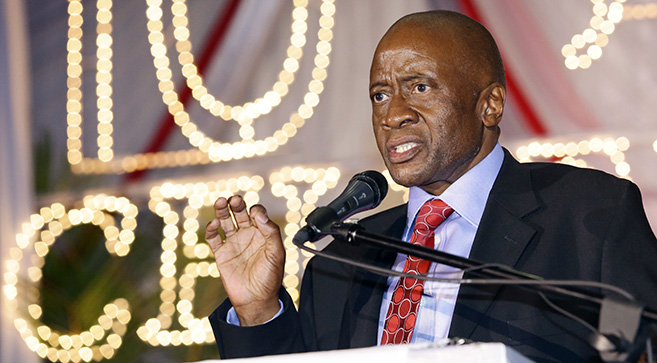 UKZN celebrated its 10-year anniversary in style with a commemorative dinner held at the MH Joosub Hall on the Westville campus.

‘Reflecting on the distinctive period, UKZN Vice-Chancellor, Professor Malegapuru Makgoba, said: ‘As we close these 10 years, remember that all of you are part of the history of the University…we are the only successful merger, others have failed and one was disbanded.’

The event, directed by Deputy Vice-Chancellor of Law and Management Studies, Professor John Mubangizi, highlighted the University’s decade of achievements, hardships and role as a leading light on the Higher Education landscape.

The event also reflected on the solid foundations laid to take the University to the next chapter.

During his keynote address, UKZN’s Founding Chair of Council and Alumnus, Dr Vincent Maphai, commended the Vice-Chancellor and his team for their achievements. ‘Walk tall, you produced an excellent university…take this moment and thrust us into the next decade.’

Maphai told the audience that the clear ‘unambiguous political’ mandate they received from the then Minister of Education, Dr Kader Asmal, was to ‘make the merger work’, adding that the important principle of management was to give clear direction about what was needed and to provide the necessary support.

He said as Council, they led by example, tightening succession issues which meant changing and reducing the term of Council. ‘When your time comes, please go…please make sure this culture is rooted in the University.’

He said there was role clarity between Council and management. He pleaded with Council not to spend one minute more than they were needed at the University, and to respect their role.

Maphai said the hands of Councillors should not be stained by corruption and they should have one prime aim – to serve the University.

Reflecting on the merger, Deputy Vice-Chancellor of Teaching and Learning, Professor Renuka Vithal, said: ‘Our success and standing can be evaluated. I am proud to claim to be part of the legacy of this past decade…there is more work to be done, but we are well on our way.’

She said the achievements included the rise in the number of students graduating from UKZN, the increase in research produced by the University and the high number of staff now studying and graduating with PhDs.

‘UKZN is truly a reflection of the new South Africa.’

Maphai commended the role played by UKZN’s first Chancellor Dr Frene Ginwala and also the quality of the Student Representative Council and Unions during the merger. He urged academics never to relent on the principle of excellence.

To distinguish themselves from other universities, Maphai urged UKZN to become number one in research in his lifetime, to build a social identity of members and graduates of the University and to inform public policy and debate.

The event also saw the launch of the 10-year commemorative UKZNTOUCH 2014 publication.  UKZNTOUCH is the annual flagship publication of the University aimed at alumni, opinion makers, strategic partners and donors.

The 2014 edition of the magazine features the theme: “Excellence through Transformation”, to commemorate 10 years of the merger. The articles feature ground-breaking research and teaching and learning initiatives, key partnerships, community engagement initiatives, and major infrastructure developments, prominent alumni profiles; and major news announcements achieved over the past decade.

Entertainment was provided by Themi Venturas Productions, the Young Black Mambazo and the UKZN Jazz Band.