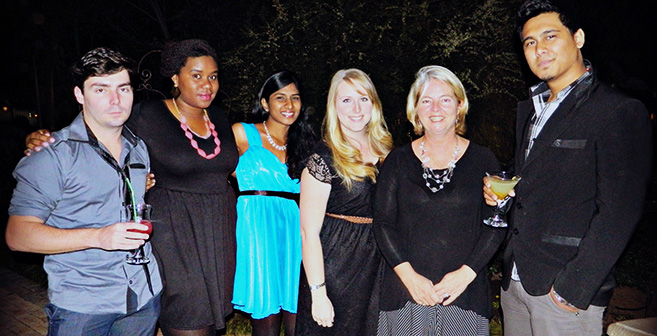 Jones, who was selected to present two papers, was also invited to contribute to a special panel discussion on self-expression and the media, while the Honours students presented the findings of their research projects as part of SACOMM’s emerging scholars’ stream.  Pitcher presented a competitive paper, based on her doctoral thesis, which was awarded best paper.

Keyworth’s work dealt with the evolution of female characters in Disney Princess movies, while Naidoo presented a controversial paper on the representation of Oscar Pistorius in the press during his trial.

Mr Amil Umraw’s work concerning social responses to domestic violence against men, was praised as a mature and eloquent study in an area where little research had been done.

Quizzed about the experience of taking part in South Africa’s most prestigious and long-running communications conference, student Mr Warwick Jones said it was interesting to engage with other students and lecturers from across South Africa, but more importantly, he appreciated the opportunity to showcase UKZN and the work done by its Media students.

The outstanding work of UKZN’s students was recognised not only by academics, but also private enterprise with three students - Naidoo, Keyworth and Ms Mellisa Muchena - invited by Van Schaik publishers to apply for internships in response to their stellar research and professionalism.