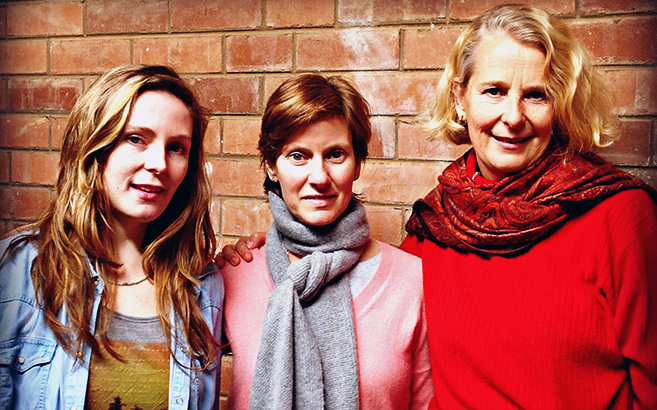 Smart’s creative practice focused on the cityscape of Durban and the patterns within the city, while the inward journey, with an exploration of the shadow self, set the ground work for Hulley’s deconstruction of the second half of life.

Jenning’s interest in geometry of nature and form was evident in a botanical series in porcelain. Her ceramics include a study of pentagon shapes in porcelain and black stoneware.

Speaking about her artwork, Hulley said: ‘I am intrigued with: “Shadow and an exploration of Self”.

‘Returning to the Centre for Visual Art after a 30-year break, it coincides with my transition from the first to the second half of life. The transition is a personal journey. I explore through the medium of oils in painting: the Self, the Shadow Self and finding catharsis through the visual arts. It is an exciting period of my life: the first half having set the foundation for the second.’

Smart’s artwork contributed to her masters degree and showcases the cityscape of Durban, the buildings and repeat motifs found within. ‘I embellish these paintings a bit to make a utopian view of the city. They are not exact copies of Durban; otherwise they would be ugly and very grey. I also work with fabric and the colours, vibrancy and patterns featured in fabric have influenced my depictions of buildings,’ said Smart.

‘A series in my Masters project features paintings of fabric found around my house - either Persian carpets, Indian throws or prayer mats are painted over some of my works of buildings that I completed for my honours degree last year. This project was experimental and I have brought together the two influences into one picture.’

Said Jennings: ‘My paintings and ceramics have always been about collections and objects that work with each other. They have also always been an opportunity to work with memories and my history.’