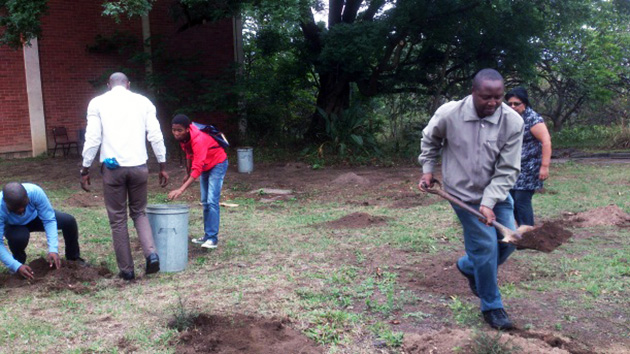 The Edgewood Environment Forum (EEF) was formed about 11 years ago to promote sound environmental principles in decisions by UKZN concerning the physical development on the campus conservancy as well as the protection, regulation and improvement of the environment.

The EEF comprises interested staff and students from Edgewood, and members of the Richmond Mariannhill Conservancy and the KZN Conservancy Association.

EEF Chairperson, Dr A James, has made numerous attempts to revise the recycling of waste matter by motivating for the drafting and implementation of a UKZN-wide recycling policy but has been unable to do so, because this appears to be a University matter to be discussed at management level.

The lack of a UKZN-wide recycling policy has not dissuaded staff members at the Edgewood campus, including Dr James, Dr R Mudaly and Mr T Chirikure, from actively engaging with activities under the auspices of the Edgewood Environment Forum.

Ms S Mdabe has been one of the most active students in the activities of the Edgewood Environment Forum.  In January, Mudaly presented the vision and mission of the Edgewood Environment Forum to first year students during the Orientation Week. Subsequently, students and staff engaged with poster displays to commemorate Water Week, as well as poster campaigns to emphasise the awareness of environmental issues.

A Conservancy seminar was held in September in conjunction with the Richmond Mariannhill Conservancy. Guests, including chemists from the Water and Sanitation Department, discussed issues around water quality in the eThekwini area.

Central to the Arbor Day initiative was the planting of yellowwood trees, donated by Mr Mark Liptrot from the Richmond Mariannhill Conservancy.

In a further effort to make the Edgewood environment more informative, the UKZN Facilities Management was contacted by James to provide information boards and plant labels for the indigenous garden which is maintained at Edgewood. In addition, staff and students were invited to display discipline-related items or posters in the display cabinets from October 2014 to December 2015.

The quest for sustainability at Edgewood is characterised by environmental integrity, economic viability and social equity. Members of the Edgewood Environment Forum believe in the following statement by Margaret Mead:  Never doubt that a small group of thoughtful, committed citizens can change the world; indeed, it’s the only thing that ever has.