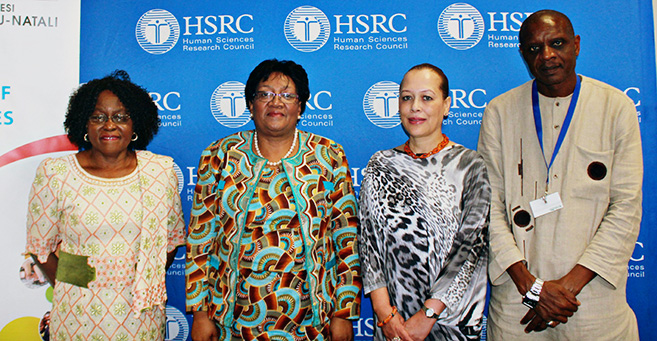 The Deputy Vice-Chancellor and Head of the College of Humanities, Professor Cheryl Potgieter, said the College was excited to be a part of the upcoming Forum in terms of UKZN’s Memorandum of Understanding with one of the hosts of the Forum, the Human Sciences Research Council (HSRC).

The WSSF, from 13 – 16 September 2015 at the Durban International Conference Centre (ICC), will involve policy makers and shapers comprising scientists, politicians, activists, civil society organisations,  labour and business leaders.  They will gather to focus on real-life issues - inequality and injustice - under the theme of: “Transforming Global Relations for a Just World”.

The forum, a flagship activity of the International Social Science Council (ISSC), is being hosted by the HSRC and the Dakar-based Council for the Development of Social Science Research in Africa (CODESRIA).

Panellists at the launch were Dr Ebrima Sall of CODESRIA, Professor Cheryl Potgieter of UKZN, the MEC for Social Development in KwaZulu-Natal, Mrs Weziwe Thusi and Professor Olive Shisana of the HSRC.

Speaking at the launch, Potgieter, who chaired the panel, said the College of Humanities was both interdisciplinary and trans-disciplinary with the School of Social Sciences housing a large number of social science students able to contribute to the forum as young academics and the next generation of researchers.

‘As the College of Humanities, we understand the importance of recognising and engaging on such social issues. Our young academics will continue to produce and disseminate knowledge to aid in the development of the continent and to transform the global agenda in relation to social change,’ she said.

Potgieter pointed out that Minister of Science and Technology, Mrs Naledi Pandor, had contributed R5 million in support of the WSSF and was one of the confirmed speakers for the conference.

Thusi believes that the Forum will have a radical impact on issues of inequality and social change. ‘This Forum will assist government to address critical issues for social change and will also contribute towards youth development, creating a space for young researchers. We look to UKZN, other universities and the National Research Foundation (NRF) to facilitate this process of contributing to the development of young researchers and in transformation of the country.’

Executive Secretary of CODESRIA, Dr Ebrima Sall, said: ‘We are aware that the sites of the struggles to transform global relations include the knowledge production world itself where the asymmetries of the global order tend to be mirrored. For those of us in Africa and in other parts of the Global South, the 2015 WSSF provides an opportunity to showcase the best of our research and publications, and demonstrate that another world is not only possible: it is a necessity.’

Shisana said the theme was informed by ‘growing inequalities at global, regional, national and local levels and the impact that had on the quality of life of populations as well as on the sustainability of resources necessary to support quality of life.

‘Participants will address trends in inequality and the measurement, nature, manifestations and drivers of this injustice. The forum promises to provide a platform for exciting, informative and insightful discourse.’

She also revealed the structure of the upcoming forum and what delegates and the public could expect next year. ‘The Partners of the WSSF 2015 Forum unanimously agreed to honour Wangari Maathai of Kenya who passed away in 2011 with a lecture held in her name.  This would provide the Forum with an opportunity to acknowledge her role and legacy in advocating scientific research and knowledge.  As this is the first Forum to be held on African soil, it is most fitting to honour one of Africa’s great leaders at this event.’

Potgieter pledged that the College of Humanities would work closely with the HSRC to facilitate a UKZN public lecture series honouring women leaders such as Maathai. This will form part of the College’s strategic goals for 2015.

As a Social Scientist and academic in her own right, Potgieter was nominated and appointed by CODESRIA and the HSRC to co-chair the conference’s Local Organising Committee (LOC).