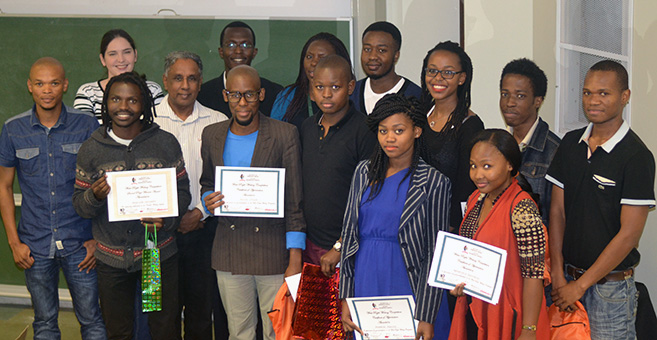 Write Right competition winners and entrants celebrating their achievements with members of the Teaching and Learning Unit.

Judges of the Write Right Competition organised by the College of Law and Management Studies’ Teaching and Learning Unit were pleasantly impressed by the quality of academic and creative writing exhibited by the finalists.

The Unit recently held a function to award the winners and entrants in the competition which was aimed at improving students’ writing and thinking skills through the writing of essays, poetry and short stories.

Teaching and Learning Unit Head, Dr Annah Bengesai, who came up with the idea for the competition, said they were impressed by the talented writers who submitted work as it proved UKZN was shaping quality graduates.

‘Writing is an integral part of a student’s academic career and that was the reason why we launched this competition. We wanted to allow entrants to express themselves creatively and award those who did well. The writers will receive notes and feedback on their submissions so that they can take their work to the next level,’ she said.

During his address, the College Dean of Teaching and Learning Professor Kriben Pillay commended the participants for using the competition to hone their writing skills which were vital for success in their academic careers.

The winner in the academic section, Bachelor of Administration in Public Governance and Human Resources student, Mr Sabelo Buthelezi, said he entered the competition because he loved academic writing and needed to know how to take his writing further than the classroom.

‘Winning came as a shock and surprise to me. I knew that I was passionate about my topic which is disaster risk reduction but I did not know that I had the potential to win. This achievement has inspired me to write more and explore more avenues which will help me perfect this skill,’ he said.

Ms Linda Mpofu, a BA Philosophy, Politics and Law student said she loved creative writing and was happy her fantasy romance story earned her an award.

Guest judge, Ms Rosanne O’ Hara, said: ‘It is incredibly refreshing to be part of an initiative that awards academic and creative writing especially since the latter does not feature much in your College. Through reading your work, I have learned so much which in turn has broadened my knowledge as an academic,’ she said.