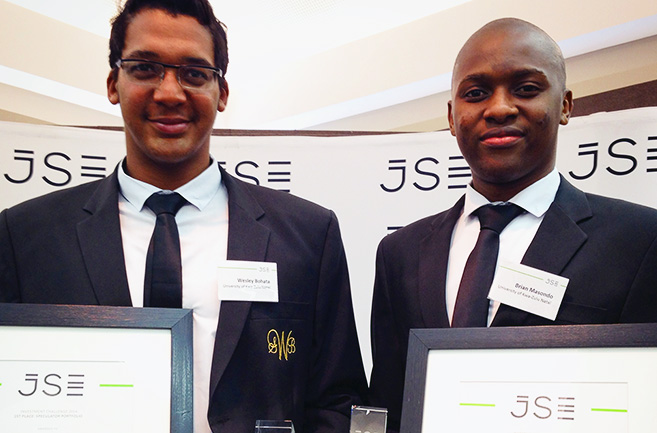 Finance honours students Mr Brian Masondo and Mr Wesley Bohata were part of the winning team that trumped 140 teams who competed in the JSE Investment Challenge to claim the number one spot nationally.

The third year Finance students from the School of Accounting, Economics and Finance flew the UKZN flag high this past weekend when the news of their achievement was made public at the awards ceremony held at the JSE, Johannesburg on Saturday.

The JSE Investment Challenge is a national financial literacy competition that provides South African high school pupils and University students an opportunity to explore the world of investing by trading JSE listed shares through a virtual portfolio.

Another UKZN team, made up of Finance honours students, Mr Kabir Singh, Mr Suveer Mohunlal and Mr Shivar Deonarain came seventh nationally and second at UKZN.  The two groups did their evaluations in December in preparation for this year as their strategy involved understanding how the global macro environment affected South African markets which were what influenced their investment and trading decisions.

‘Words can’t describe the feeling, but saying “It means the World to me” sums it up the best because it proves that our evaluation techniques are correct and it also shows that we are able to apply what we’ve been taught by our lecturers since first year. It also feels great to make my parents and lecturers proud because none of this would have been possible without their support, said Masondo.

Bohata added that their strategy for the Challenge was to “go big or go home” and it really paid off.

‘Winning the challenge means a lot to us. We never set out to win for the prizes but we wanted to win just to prove that we are top Finance students in the country and to change the stigma that only the big varsities produce top students. It also means that all the hard work we have been putting in, during our leisure time, is paying off as our investment strategies are reaping rewards,’ he said.

With investments as part of their future plans, the pair’s future plans include completing their studies next year and ensuring that their company, SWB achieves enough success to be listed on the JSE.

Finance Academic Leader and  Lecturer, Dr Mabutho Sibanda said this achievement was proof that the approach they have adopted as a Discipline of combining academia and industry practices is a recipe for success.

‘Our visionary leadership in the School is based on us aligning the curriculum with industry requirements and the JSE Investment challenge provides students with a platform to show what they have learnt. It also created an environment for friendly competition as they were keeping up to date with investment news so that they can outperform each other. I am very proud of them and what they have accomplished,’ he said.