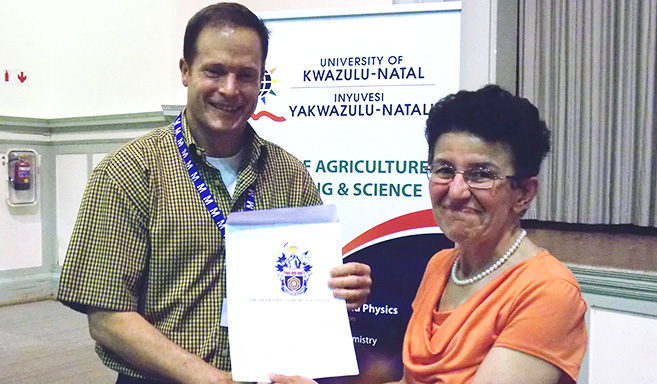 Professor Orde Munro of the School of Chemistry and Physics - who overcame some of the serious effects of two strokes he suffered in 2011 - has won the South African Chemical Institute’s (SACI) Sasol Innovator of the Year Award.

His certificate was presented to him at the recent SACI Postgraduate Colloquium in Pietermaritzburg.

Munro, who suffered the strokes while on his Fulbright Scholarship sabbatical at the College of Medicine at the University of Central Florida, said: ‘Being able to recover from this health catastrophe to the point of being a functional and devoted parent to two daughters, a husband to my wife, and being able to teach chemistry and publish research again in top international journals, despite having permanent brain damage, is what some would call a miracle and others a marvel of how human cells and organs can adapt and recover from serious damage,’ said Munro.

The prestigious Sasol Innovation Medal is awarded to a person working in the field of industrial chemistry or chemical technology who has shown innovation and application in their research endeavours.

‘Professor Munro received this prize for his invention and patent of a novel class of anticancer drug candidates,’ said the Vice-President of SACI and the Chair of the KZN Section of SACI, Professor Bice Martincigh, who presented Munro with the award.

‘There are very few groups in the world who can achieve what Professor Munro and his group did with their collaborators in the US in a short time in a research field not widely represented in South Africa,’ said Martincigh. ‘The adjudicators of the award found Professor Munro’s submission outstandingly innovative.  They mentioned the fact that he was able to progress a number of promising cancer candidates through the stringent National Cancer Institute in Washington, which in itself attests to the quality of his well-designed innovative drug candidates.’

Munro’s work was also published in the prestigious Journal of the American Chemical Society, one of the world’s leading chemistry journals. The paper covers the compound invention, design and testing (anticancer screens) and mechanism elucidation (enzyme targeting and macromolecular simulations).

‘This is a highly significant feat for any novel metallodrug candidate with a non-typical mechanism of action,’ said Martincigh.

Munro, who has been at the University for 17 years, has been recognised many times for his outstanding research, receiving the National Research Foundation (NRF) President’s Award in 2000, the Vice-Chancellor’s Research Award in 2007 and the Raikes Medal of the South African Chemical Institute in 2008. He also worked with Professor Mark Muller on this innovative research thanks to his Visiting Fulbright Scholarship at the University of Central Florida’s College of Medicine.

De Beers, Avitronics, Sasol, AuTEK BioMed and the NRF have supported his research over the last decade, with his current work also being indirectly supported by the NIH (USA) through their Developmental Therapeutics Program (DTP). Support from AuTEK BioMed has enabled Munro to graduate four PhD students in the field of research on novel cytotoxic anticancer compounds based on gold and vanadium. Work from these PhD theses is the process of being published.

Munro said being recognised for his discovery, patent and subsequent publication, all of which resulted from a struggle against many odds since starting the research in 2007, was wonderful. He expressed gratitude to AuTEK Biomed for their funding and to Dr Judy Coates for her support of his research proposal and students.

‘Both the funding and Dr Coates’s endless enthusiasm for our work allowed me to train four PhD students and three MSc students and enabled me to refocus my research efforts on metallodrug discovery. The project represented a very steep climb in order to switch gears from supramolecular and metalloporphyrin coordination chemistry to pharmaceutical research and innovation,’ said Munro.

‘Navigating the IP landscape was especially challenging, particularly since a culture of innovation is not at all well-established at UKZN or elsewhere in the country. I had little guidance in the process of patenting the work and this was unbelievably stressful – kind of like jumping out of an aircraft as a first-time parachutist,’ said Munro of the stressful process of completing this research.

Munro was vocal in his appreciation for the PhD students working with him who contributed to the success of his research.

‘I was very fortunate to have Drs Matthew and Kate Akerman, who have amazing synthetic skills, at the bench with me. It is indisputable that a hallmark of success in science is the ability to conduct experiments with the utmost accuracy and to be able to solve problems independently in the lab on a daily basis. Both Kate and Matthew have these traits and were pivotal to the success of the main research theme. It is one thing for me to come up with novel ideas and an innovative research project, but an entirely different process to bring these ideas to fruition. For that you need smart, hard-working students,’ said Munro.

Munro also thanked key mentors, friends and colleagues for their input; in particular Professor Tim Egan of the University of Cape Town, Professor Helder Marques of the University of the Witwatersrand and Professor W. Robert Scheidt, retired from the University of Notre Dame in the United States. All three, said Munro, played pivotal roles in stirring his enjoyment of research through their impartation of key skills and encouragement of his development in independent, creative thinking around chemistry.

Munro expressed gratitude to his wife, Tracey, for being his closest friend and for her support in the daunting world of academia. ‘As a scientist and prominent teacher in the community herself, my wife knows the daily grind and sacrifices one has to make to be successful in science and academia as a whole,’ he said.

As Academic Leader in the School of Chemistry and Physics, Munro said he had been happy to contribute to the operation of the School and was proud of how well the management team of the School got its business done efficiently.

‘Our School is a pretty good place to conduct chemical research because of its extensive and modern equipment base of state-of-the-art instruments, which are crucial to characterising novel compounds and materials,’ said Munro. ‘Chemistry departments are notoriously expensive to run, but the University and College can be proud of the fact that their investment in equipment and skilled people yields world-class results.’

Munro will present his Award Lecture based on his research at the next SACI National Convention.